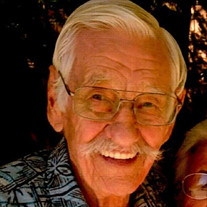 William “Wayne” Mead, a 52 year resident, of San Jacinto, California passed away on April 5, 2022. He was 98 years old; just four weeks “shy” of celebrating his 99th birthday. Wayne was born on May 2, 1923 in Merlin, Oregon to William Robert and Selma Mead. Wayne was the second oldest of five brothers and is survived by his brother Cecile Mead. Wayne Mead married his “dream girl” and the love of his life, Eva Margaret Mares, on May 16, 1951. They were married for 68 years, until Eva’s passing in September 2019 at the age of 94. When Wayne married Eva he became the cherished father to his three children: Mable, George and Hope (Hope passed in November of 2020). Along with being the father to three children, Wayne is grandfather to eight grandchildren: Kathleen (Eric), Dianne (Paul), Ronald (Claire), Cynthia (Chris), David, Adrienne, Robert and Rita (Rick), 16 great grandchildren: Courtney, Eric, Ashley Kathleen, (passed 2015) Christy, Emily, Kyle, Christopher, Elizabeth, Corey (passed 2020), Ryan, Catalina, Olivia, Samuel, Randy, Rachel, and Ashley, and one great-great grandchild: Charlotte. With his marriage to Eva, Wayne began the life he dreamed of as a young man living in the farming community of Alpaugh, California, while picking cotton on his father’s farm. It would turn out that the amazing life Wayne lived would surpass all of his dreams. Wayne graduated from Alpaugh High School in May of 1940. Before meeting Eva in San Diego, California, Wayne was a World War II Veteran, serving in the United States Navy as an Aviation Ordnanceman Second Class USNR. Wayne served from 1942-1944 in the Aleutian Islands just off of the coast of Alaska. Wayne completed his Naval Service in Jacksonville, Florida and was honorably discharged in January 194 6. With some assistance from the G.I. Bill, Wayne attended Visalia Junior College in California where he received his Associate of Arts Degree in June 1948, and then was accepted to the University of Washington in the state of Washington where he graduated March 16, 1951 with his Bachelor of Science Degree in Electrical Engineering. In January of 1951, before Wayne began his married life with Eva and their three children, he had begun his electrical engineering career with being hired by U.S. Navy Electronics Laboratory in San Diego, California. Throughout his career, Wayne had worked for various aviation companies along with owning and servicing his own television repair business ,“Mead TV” ,from 1970-1979 in San Jacinto. The last 10 years of Wayne’s career was with Hughes Aircraft Company, where he worked from July 31, 1979 until his retirement on September 29, 1989. Wayne began and ended his career as an electrical engineer , a field that he loved, and would later share with his loved ones that “he never thought he had the brains or talent to go to college” let alone work in such a specialized career. During his life long marriage with Eva, they were many trips traveling and seeing the United States with their children and camping with their grandchildren. They also enjoyed special trips with friends and family to Mexico City and one of their favorite places was Alaska. After Wayne retired, he and Eva bought their motor home and were able to travel and spend time in all 50 states (while Hawaii was an airplane ride and part of their many time-shares  ). All in all they spent a total of two plus years traveling the United States in their “home on wheels”. It truly was one of the major highlights of Wayne and Eva’s long life together. Wayne and Eva were also world travelers and were able to spend time in Europe and England. For all of those who knew and loved Wayne, it was especially known how much Wayne loved and appreciated nature of any kind. He was most especially fond of the Southwest to include, Arizona and New Mexico. For several years after Wayne’s retirement, he and Eva spent the month of February in Death Valley, California, one of their favorite places. It’s a favorite memory of family and friends close to Wayne and Eva who were able to visit and stay with them during those trips. The home that Wayne and Eva made together in San Jacinto, for the last 52 years, is a very special place where family and friends gathered for celebrations and many, many, many special visits. Wayne’s home is truly a reflection of the man who loved nature, and who grew and maintained a yard that he loved, raised and loved his various cats and dogs, an oasis for all type of birds and it became a place where the random seed took root and 30, 40 and 50 years later has become the home to a variety of trees very special to Wayne. From a teenage boy on his father’s farm, who would day dream while picking cotton about the life he wished for, to becoming the man who lived every one of his dreams, his family would like to thank you for loving him like we do and to know that there never will be another person like William Wayne Mead. His Legacy will live on in the family and friends that truly cherished him. Please join us in a celebration of Wayne’s life to be held on Thursday, May 12, 2022 Miller Jones Mortuary 1501 W Florida Avenue Hemet, CA 92543 Viewing: 9:00 a.m. to 10:00 a.m. Memorial Service: 10:00 a.m. – 11:00 a.m. Burial: Riverside National Cemetery 12:00 p.m. – 12:30 p.m. Reception: to follow at the home of Wayne Mead 1:30 p.m. – 5:00 p.m. One of Wayne’s favorite colors was Ruby Red…we are asking for those attending that some sort of red be worn in his honor.  For any questions, please contact son, George Mead – (951)-970-0599 – Cell Phone or granddaughter – Kathy Laneri (623) 363-1061 – Cell Phone

The family of William Mead created this Life Tributes page to make it easy to share your memories.

Send flowers to the Mead family.