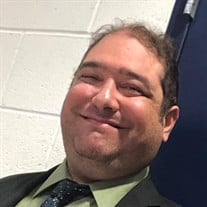 It is with great sadness that we inform you of the passing of Roberto D. Gomez (age 44), of Menifee, California. He passed away, Thursday, August 26, 2021 in his home in Menifee, surrounded by his wife and daughters. Roberto was born on November 6, 1976 in San Francisco, California. He moved to San Diego at age 2, where he lived until he moved to Moreno Valley, in 2001, and then to Menifee in 2008. Roberto graduated with honors from San Diego School of Creative and Performing Arts, he had attended that school since 6th grade. He appreciated art and music in many forms; he loved to draw and play the violin and viola. He put himself through college by working at Sea World to pay his tuition. Struggling with dyslexia, Roberto was undeterred in his academic pursuits; he earned his teaching credential from San Diego State University. In September of 2001, he was recruited to teach for the Moreno Valley Unified School District, working as a 3rd grade teacher at Armada Elementary for nearly 20 years. Roberto loved his students and colleagues; he always took the time to talked to and help everyone. At Armada Elementary, Roberto met Juanita a fellow teacher, and they married on March 21, 2009. While he didn’t like romantic comedies, he would watch them with his wife and would change the lyrics to her favorite songs so much that she no longer recalls the original version. Although Roberto had many titles, the one he loved the most was being daddy to Daniela and Leilani. Roberto was a hands-on daddy: reading, changing diapers, and helping with homework. He played video games and loved being silly with them. His legacy is definitely one of love. Roberto never had a harsh word to say to anyone and was a loyal friend to all who were fortunate enough to cross his path. In December of 2020, he was diagnosed with Pancreatic Cancer stage IV. His illness was challenging, yet he never complained once. He fought hard for his girls. But lost his battle on Thursday, August 26th, 2021. He left surrounded by his wife and daughters. Roberto is survived by his wife Juana Arriaga, their daughters Daniela Gomez-Arriaga (age 11) and Leilani Gomez-Arriaga (age 10). As well as his parents Manuel Gomez and Maria Gomez, sisters Claudia Guadalupe, Martha Gomez and Chantal Gomez-Cotillon. The viewing will be Thursday, September 9th from 4-7 PM at Miller Jones, at 26770 Murrieta Rd. Menifee, Ca. 92585 The burial will be Friday at 11 a.m. at the same location, followed by a reception.

It is with great sadness that we inform you of the passing of Roberto D. Gomez (age 44), of Menifee, California. He passed away, Thursday, August 26, 2021 in his home in Menifee, surrounded by his wife and daughters. Roberto was born on November... View Obituary & Service Information

The family of Roberto Daniel Gomez created this Life Tributes page to make it easy to share your memories.

It is with great sadness that we inform you of the passing of...

Send flowers to the Gomez family.