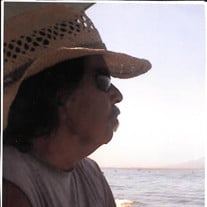 Raymond (Ramon) Jimenez Sanchez, age 70, of Beaumont, CA, passed away Tuesday, March 16, 2021. Raymond was born on April 29, 1950 in Victoria, Texas. He was the son of the late Genaro Sanchez and the late Alicia (Jimenez) Sanchez. Raymond was... View Obituary & Service Information

The family of Raymond (Ramon) Jimenez Sanchez created this Life Tributes page to make it easy to share your memories.

Send flowers to the Sanchez family.