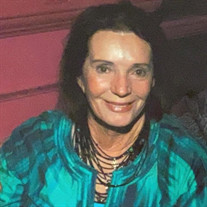 MARY LYNNE BALLINGER On Sunday morning, January 30, 2022, Mary Lynne Ballinger passed away peacefully while in the arms of her loving husband, Dr. Dewey Ballinger, after a six year struggle with Alzheimer’s disease. Mary was born in Clayton, Michigan on January 6, 1944. At the time of her birth, her father, Captain Fred Roberts was in France fighting on behalf of the United States and Allied Forces in World War II. After the war, Mary’s father worked on IBM computers at China Lake Naval Air Station in Ridgecrest California, which is where Mary spent a good deal of her youth, along with her mother Roberta Roberts and her brother, Steve Roberts. In 1958, Mary’s family moved to Redlands, where she attended Redlands High School and, among other activities, was a majorette on the majorette squad. Mary graduated Redlands High School in 1961 and went on to San Bernardino Valley College, where she obtained her AA degree in 1964. In 1963, Mary was selected to be Honored Queen of Job’s Daughters Bethel 104. Also in 1963, Mary met her future husband, Dewey Ballinger while in college, where they started a fifty-nine year romance, which included over fifty-six years of marriage. On June 12, 1964, Dewey asked her to marry him, and exactly one year later, on June 12, 1965 they were married in Redlands. Dewey and Mary moved to Davis, California, where Mary worked to help her husband finish his last three years of veterinary school. In the Fall of 1972, Mary helped her husband start their own veterinary practice, working as a receptionist and veterinary assistant. The practice grew and in time Mary was able to convert to being a full-time mother. Mary and Dewey became parents to Brian in 1970, Michael in 1972, Jeffrey in 1974 and Dana (the icing on the cake) in 1975. Mary thoroughly enjoyed being a mother, den mother, homemaker, and then later a grandmother to nine grandchildren.

The family of Mary Lynne Ballinger created this Life Tributes page to make it easy to share your memories.

Send flowers to the Ballinger family.