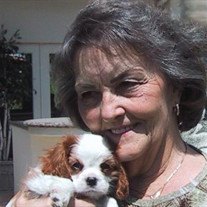 Loretta J. Neff (85) of Temecula, California passed away on February 19, 2022 at her home suddenly due to complications related to kidney failure. Loretta was born in Croft, Pennsylvania, on March 10, 1936 to James “Scotch” and June Bain. She spent her youth in Clearfield, PA, spending her summers in a nearby town with her Mom’s family, where she ultimately met her husband, Robert Neff. Loretta and Bob were married June 8, 1956 and recently celebrated their 65th wedding anniversary. She spent her adult years raising her 5 children, relocating to multiple states throughout Bob’s career, ultimately retiring in Temecula in 2006. She enjoyed spending her time on the golf course, the occasional visit to the casino as well as socializing with friends. Her later years were spent loving “the girls”, their Cavalier King Charles Spaniels, Lucy and Molly. In addition to her husband Bob, Loretta is survived by her children Gary Neff of San Marcos, CA, Greg (Tish) Neff of El Paso, TX, Benny Neff of North Hollywood, CA, Jackie (Don) McCune of Anaheim, CA, Grandson Jake McCune of Palos Verdes, CA and her sister, Peg Mills of Clearfield, PA. Loretta was preceded in death by her son, Mike Neff of Mesa, AZ, her parents, Scotch and June Bain of Clearfield, PA and her brother, Gerald Bain, of Alameda, CA. Funeral mass will take place Monday, March 21, 2022 at St. Mother Teresa of Calcutta Church at 34750 Whisper Heights Pkwy, Winchester, CA 92596 at 11:00 am. Immediately following the service there will be a reception held at the Neff residence in Temecula, CA 92591 (message or text us for the address) In lieu of flowers, donations may be made to the St Teresa of Calcutta Church Building Fund (https://www.btocchurch.org) or the charity of your choice.

Loretta J. Neff (85) of Temecula, California passed away on February 19, 2022 at her home suddenly due to complications related to kidney failure. Loretta was born in Croft, Pennsylvania, on March 10, 1936 to James &#8220;Scotch&#8221; and... View Obituary & Service Information

The family of Loretta J. Neff created this Life Tributes page to make it easy to share your memories.

Loretta J. Neff (85) of Temecula, California passed away on February...

Send flowers to the Neff family.