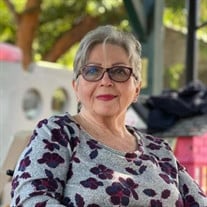 Kathy Marie Adams, 71, passed away peacefully with her daughter Kim Nolan at her side on Friday, May 13, 2022, at Loma Linda Medical Center Murrieta. She was born to Jessie and Maude Richardson on January 7, 1951, in Elk City Oklahoma, the third of three sisters. Kathy did not benefit from the Polio vaccine which was only developed a few years after her birth, so by the time she was 5 or 6 Kathy had contracted this deadly disease and was in a body cast from the waist down. Kathy survived polio and was able to walk again but the effects of it followed her the rest of her life. Sadly, her two loving older sisters Mary and Judy, as well as her parents predeceased her. Kathy proudly called herself “Okie” all the days of her life (although she also claimed to have some Italian blood out of love and respect for her BFF Annie Hernandez). Kathy met her first husband Gregorio Torrez when she was still quite young. They married and had two children – Gregory and Kimberly. Unfortunately, Gregorio passed away after 10 years of marriage and Kathy was left to raise two young children. However, life soon took a turn for the better! Kathy met and eventually married her second husband, Aaron Roth. The two families merged, adding two stepdaughters Leigh and Tammy as well as many members of Aaron’s extended family. Aaron and Kathy had a wonderful life of travel and adventure until tragically Aaron passed away 10 years later from cancer. Now Kathy was alone again. Her children by this time were young adults, but she still had to manage a life alone. It was at this time she met and fell in love with Philip Adams. Philip and Kathy were married on May 3, 1997, in the City of Orange. The couple had 25 great years together, traveling the country and spending many wonderful days and weeks on the central coast of California, as well as Arkansas and Georgia. Kathy loved Big Sur and Carmel above all places she visited. Many a day did Phil and Kathy spend watching monarch butterflies in Pacific Grove and walking the beaches near Pebble Beach. And let’s not forget her favorite pastime – shopping. Some of the best times of her life were with her daughter Kim or her friend Annie looking for bargains from Redlands to Fountain Valley! And despite her many surgeries and the recurring pain she constantly battled resulting from polio as a child, Kathy never succumbed to self-pity or regret. Even after the tragic loss of her beloved son Gregory, she was always upbeat and positive with a smile for everyone she met. Kathy was the very essence of kindness and that’s how we should remember her – with her big smiles and hugs. Kathy is survived by her husband Philip, her daughter Kimberly, her daughter-in-law Dawn and Dawn’s companion Larry, her stepdaughters Leigh and Tammy, her best friend Annie Hernandez and Annie’s husband Sal, her son-in-law Ian and Ian’s wife Sherry, her son-in-law Jason and his wife Courtney, her daughter-in-law Amy and her husband Chris, her sister Mary’s daughters Suzie, Diana and Brandy, sister-in-law Julia’s daughter Deanna, grandchildren Christina and Christina’s husband Paul, Joseph, Zachary and Zachary’s wife Crystal, Michelle and Michelle’s husband Genaro, Heather, and many beloved greatgrandchildren. The number of friends and neighbors who loved Kathy is endless. If I have missed anyone, I apologize. Kathy knows you loved her. God bless her memory. May she rest in eternal peace in God’s arms.

Kathy Marie Adams, 71, passed away peacefully with her daughter Kim Nolan at her side on Friday, May 13, 2022, at Loma Linda Medical Center Murrieta. She was born to Jessie and Maude Richardson on January 7, 1951, in Elk City Oklahoma, the third of... View Obituary & Service Information

The family of Kathy Marie Adams created this Life Tributes page to make it easy to share your memories.

Kathy Marie Adams, 71, passed away peacefully with her daughter...

Send flowers to the Adams family.