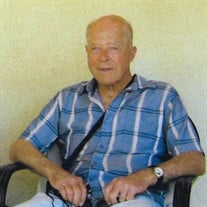 Harry George Gilpin, 99, passed-away on Sunday, July 11, 2021, in Hemet, California. He was born on Wednesday, April 5, 1922 in New Mexico, to his parents, Clarence and Anna Gilpin. After high school, Harry enlisted in the U.S. Navy, where he attained the rank of Radioman Petty Officer 1st Class. He served on four destroyers in both the Pacific and European theaters. His final assignment was on board the USS Meredith (DD726) which took part in the June 6th, 1944 D-Day invasion. After his honorable discharge from the Navy, Harry joined the Los Angeles Police Department (LAPD), where he attained the position of Juvenile Detective – Investigator3. During that period, Harry was honored by the City of Los Angeles for his work that reunited a family with their kidnapped daughter. He retired out of the Rampart Division after 30 years of service. While working for the LAPD, Harry met the love of his life, Dorothy Elsie Buck, who was also working in the department as a dispatcher. They got married on July 14, 1946. They raised two children together. Harry was an amazing husband and father. In his spare time, Harry was quite the handyman and could fix anything you needed him to fix. He also enjoyed camping trips with his family, fishing and traveling in their trailer and later in their motorhome, visiting most of the National Parks throughout the west. He especially enjoyed taking his boat out and water skiing. Harry was a Shriner and a Mason. Harry and Dorothy enjoyed their later years as active square dancers, frequently visiting their winter and spring home in Yuma, AZ. Harry was a great man who will be missed by his family and friends. He was preceded in death by his parents, Clarence and Anna Gilpin. Harry is survived by his wife of 75 years, Dorothy Gilpin, his children, Sharon Gilpin and Chris (Karole) Gilpin, his grandchildren, Christopher, Ashley, and Lauren and 6 great grandchildren. A visitation will be held at Miller-Jones Hemet Mortuary in Hemet, California on Wednesday, August 4, 2021 from 9:30AM -10:30AM. A graveside service will follow at Riverside National Cemetery at 12:00PM.

Harry George Gilpin, 99, passed-away on Sunday, July 11, 2021, in Hemet, California. He was born on Wednesday, April 5, 1922 in New Mexico, to his parents, Clarence and Anna Gilpin. After high school, Harry enlisted in the U.S. Navy, where he... View Obituary & Service Information

The family of Harry George Gilpin created this Life Tributes page to make it easy to share your memories.

Send flowers to the Gilpin family.