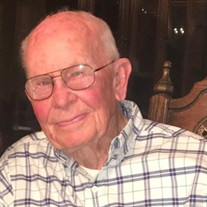 Gordon Lorence Setran of Lake Arrowhead, California passed away Tuesday, January 11, 2022 at the age of 99 years. He was born June 1, 1922, in Douglas, North Dakota and spent much of his childhood on the Setran family farm in Minnesota. Gordon served his country in World War II as a member of the 106th Infantry returning home after fighting in the Battle of the Bulge. After the war, he worked as a civilian for Operation Castle on Bikini Atoll during the atomic bomb trials. Gordon worked for the IRS and the Federal Home Bank, before co-founding a Savings & Loan in Corona around the same time that he married his beautiful bride Brigitte in 1963. He retired in 1985. In retirement, Gordon devoted himself full time to his true passion, owning farmland, including his family’s “home” farm in Minnesota which originally had been homesteaded by his Norwegian grandparents. For years, Gordon and Brigitte divided their time between Minnesota and Lake Arrowhead, cherishing their leisurely motorhome trips across the western United States with their dog and cat in tow. They also enjoyed many trips to Mexico and Alaska. Gordon loved his mountain home in Lake Arrowhead and spending time there with his family, as well as with visiting friends and relatives. Gordon passed away peacefully in his home, surrounded by his wife, children and grandchildren. He is survived by his wife, Brigitte, his daughters Andrea Matiauda (and son-in-law Jose) and Tanya Hobart (and son-in-law Craig), his son Stephan Setran (and daughter-in-law Melody), his grandchildren, Sebastian, Ainsley, Markus, Aidan, Lorelei and Casey, and his sister Helen Eidal. He was preceded in death by his parents and brother. Gordon was a loving husband, father, and grandfather; his family and friends will miss him greatly. Arrangements are entrusted to the care of Miller-Jones Mortuary Moreno Valley. In remembrance of Gordon Lorence Setran's life, the family asks that any charitable donations be made to the following two charitable foundations: American Brain Foundation https://www.americanbrainfoundation.org/ Fisher House Foundation https://connect.fisherhouse.org/

Gordon Lorence Setran of Lake Arrowhead, California passed away Tuesday, January 11, 2022 at the age of 99 years. He was born June 1, 1922, in Douglas, North Dakota and spent much of his childhood on the Setran family farm in Minnesota. Gordon... View Obituary & Service Information

The family of Gordon Lorence Setran created this Life Tributes page to make it easy to share your memories.

Send flowers to the Setran family.