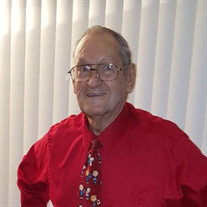 Edward was born in Newport, Rhode Island on December 20, 1930, one of six children to the parents of Alfonso and Carrie Perry. Ed was the fifth child of the family of six. His siblings have preceded him in death: William, Amy, Edith, Florence, and Robert. He and his friends would spend their time at King Park where his sister Amy worked taking care of the children at the bathe house. King Park was one his fondest memories of his family and Newport Rhode Island. Ed starting working at the early age of 10 in the local grocery store until he went into the service at age 17 ½. His older brother William chose the Navy and his younger brother Robert the Army. As a teenager, Ed was in the ROTC for 3 different branches and when the time came, he chose the Army Air Corps. He tells the story of the day he went to enlist and he passed all requirements with the exception of his weight, he was three pounds shy. Ed told the Recruiter; keep my paperwork and I’ll be back next week. That he did with a gallon of water and bag of bananas which he ate on the bus back to the Recruiter’s office and he weighed in perfect. After Boot Camp he choose the Air Force that was just being established. Just turning 18, he knew what he wanted and that was to serve his country and make the Military his career and did so proudly for twenty-one years. In May 1948 off to Lackland AFB/Texas, then to Tampa, Florida with his first assignment working in the library. AT 18, Ed knew he was planning on having a career and being a librarian certainly wasn’t what he had in mind for a career. Ed asked to see the Commanding Officer and quietly, but in a firm manner explained; I come from a Military family, I plan of making my career in the Military, and I do not want to be a librarian. The Commander understood his request and found him a place in the photo lab which Ed accepted with joy. His quick ability to learn, moved him up so quickly getting stripe after stripe and surpassing those much older than him. Ed was a leader all his life. Before he enlisted, there was a young girl by the name of Rosamond, who was fond of Ed and as he tells, she would watch him work from across the street. Lo and behold in 1951 they were wed. Ed had already been to Colorado Springs and was now stationed at MAFB in Riverside, California, where their first child, David was born. From 1953 to 1954 he was sent to Korea. After Korea, next Minnesota, and a short time in Missouri where a second son, Robin was born. Off to Arizona and back to Massachusetts, daughter Susan came along and now the family was complete. Ed was sent to Germany for three years and his stories of that tour of duty gave him fond memories. Ed retired from USAF in 1968 and then decided to move back to Riverside, California to raise his family. Ed’s vocation in the military, as a printer certainly paid off, after his move to Riverside. Within no time, he went to work for A-to-Z printers and later on moved to Form Print where he went from working on the presses to a Sales person. There he continued to charm his customers with his outgoing and charming personality. At 65, he said that is it and I’m retiring. Ed had met his second wife, Marion, joined the Elks and wherever there was a dance you would find them on the dance floor. After Marion’s passing, Ed met another lady in his dance life and that was Barbara. Barbara and Ed shared his last years dancing as well as some traveling and had a wonderful companionship. Ed passed quietly in the company of Barbara and Susan on Saturday January 15, 2022.

Edward was born in Newport, Rhode Island on December 20, 1930, one of six children to the parents of Alfonso and Carrie Perry. Ed was the fifth child of the family of six. His siblings have preceded him in death: William, Amy, Edith, Florence,... View Obituary & Service Information

The family of Edward James Perry created this Life Tributes page to make it easy to share your memories.

Send flowers to the Perry family.