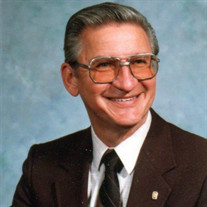 Donald Eugene Smith died on Thursday July 22nd, 2021. He was 90 years old. Don lived a wonderful life, a life full of love, friendship, service, and travel. Don was born on March 4th, 1931 in Williamsport, Pennsylvania to Kenneth and Myrtle Smith. He and his older brother Carl grew up on the family dairy farm, milking cows and delivering milk. In 1951, Don joined the United States Marine Corps and deployed to Korea and then spent several years stationed in Hawaii. He attained the rank of Staff Sergeant and served as the Administrative Chief for 1st Battalion, 3rd Marines. Though he only spent three years on active duty, he spoke fondly of his time in uniform and proudly wore his Once a Marine, Always a Marine cap. After serving honorably, Don dabbled in the import and export business, shipping lumber to Asia. He then joined Sears where he worked for more than 30 years as a highly successful salesperson, department manager, and store manager. At Sears, he met his future wife, Dorothy Marie Smith. The happy couple lived and worked in Southern California until 1975, when they decided to quit work, sell everything, and see the country. They often said this was the best decision they ever made. For five years they traveled the United States in their fifth wheel camper, eventually settling in Pennsylvania near Don’s family. Don and Dorothy- affectionately known as Dottie- spent twenty years in Pennsylvania, living on the family farm and then in the Smith family cabin that overlooked Loyalsock Creek. Always the handyman, Don renovated the cabin and improved the property. While in Pennsylvania, Don hunted and Dottie canned. The two both enjoyed hiking the trails, relaxing on the porch, and visiting with family and friends. They especially enjoyed watching the bears that often came to visit. While in Pennsylvania, Don became a proud member of the Masons and joined the local chapter of the Marine Corps League. Don and Dot eventually made their way back to the West Coast, landing first in Moreno Valley where Don went back to work and once again became a Sears Man. They finally settled in Menifee, California where they became active members of the community and enjoyed the companionship of friends, family, and- most notably- each other. Service to his community was always important to Don. He volunteered for the Reserve Deputy Sheriff Program and for many years served on Menifee’s Crime Watch. He was an active member of Casablanca Villas facilities committee and, as part of the community breakfast club, helped serve up many delicious pancake breakfasts at the clubhouse. Together, he and Dot were valued members of the community that they loved and enjoyed so much. Don loved his Craftsman tools and his cactus garden. He loved hot black coffee, bacon and eggs, coconut cream pie, and chocolate peanut butter ice cream. He loved entertaining everyone with the jokes he told and the cartoons he clipped. He loved playing the organ and traveling the country in his many motor homes. He loved his friends, his family, and his poodles. More than anything, though, he loved his sweetheart Dottie. Donald and Dorothy Smith demonstrated true and abiding love. Don often told us how much he enjoyed being married to his “sweetheart” of 53 years. Theirs truly was a model marriage. They often said they were lucky to have each other, but we too were blessed by their steadfast devotion and unwavering love. They held hands and were by each other’s sides every day. They served as a wonderful example of what it means to love unconditionally. Left to honor and remember Donald Smith are his brother, Carl Smith, along with his wife Dorothy Smith and their children and extended family members; his stepdaughter, Beverly Griffith; his grandson, Douglas Griffith; his granddaughter, Kimberly Frazier, along with her husband Michael Frazier; his two great-grandchildren, Emily Frazier and Sarah Frazier; and his treasured friend and neighbor Carol Boyle. He is preceded in death by his beloved wife, Dorothy Marie Smith, with whom he will be spending eternity.

The family of Donald Eugene Smith created this Life Tributes page to make it easy to share your memories.

Send flowers to the Smith family.