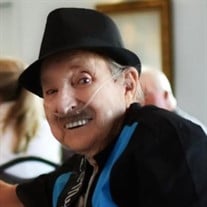 David "Big Dave" Minyard, 80, made his transition from this plane to the next, surrounded by family, on November 22, 2021, due to COPD related complications. Big Dave was born in Arkansas in 1941 and moved to Redlands, CA in 1944. He attended Redlands Jr. High and graduated from Redlands High in 1959. He lived in Redlands for over 70 years before moving to Menifee. During that time he worked for the city, county, state and government. He was most known for owning and operating his personal landscaping business for over 40 years. He was frequently seen around Redlands having breakfast at the famous Kay’s Cafe, Sage’s, and of course, dancing the night away at Empire Bowl. Big Dave had an amazing zest for life. He loved people, and would never hesitate to strike up a conversation with anyone, especially the ladies! With his kind, generous heart and easy-going spirit, he wouldn't think twice about giving someone the shirt off his back. He always had a joke or an elaborate story ready to share about all the good times he experienced throughout his life, of which there were many. At the age of 70, within a two year period, Big Dave was diagnosed with five different cancers. One right after the other. And one right after the other, he fought and beat them all. During that time, when things got rough, Big Dave always kept a positive attitude. Even after his last radiation treatment he asked the radiologist out on a date! His tough as nails strength and ability to find fun in every situation was an inspiration to those around him. He will continue to be a hero to those who knew him best. He is survived by his son Lil’ Dave Minyard (Cara) of Menifee, Lynette Negrete (Armando) of Highland, Crystal Hanson (Orvin) of Murrieta, and Anthony Flanigan (Sabrina) of Redlands; as well as his twin sister Mary Hamilton (Jerry) of Willows and a total of 10 grandchildren. Also, various nieces, nephews, cousins, brothers from other mothers and sisters from different misters. He had many friends and extended family whom he valued immensely. Big Dave was preceded in death by his loving parents Albert and Pauline Minyard "Mam-ma and Pap-pa" and his older brothers, A.J. and Wendell "Tink." Those who knew Big Dave best, knew that he always had a smile on his face and always wished the best of the best for everyone. So, in line with that amazing philosophy, we will be having a celebration, not in mourning, but in honor of a great man that left his mark on so many people. The Celebration of Life will take place at 2pm on Dec 19th, 2021 at the Center for Spiritual Living, Menifee Valley 26805 Murrieta Rd, Sun City, CA 92585. All are welcome, please RSVP by emailing [email protected] If you cannot attend but want to share a story you have of Dave, or condolences, you can email your message and it will be read at the ceremony. Death leaves a heartache no one can heal, love leaves a memory no one can steal.

David "Big Dave" Minyard, 80, made his transition from this plane to the next, surrounded by family, on November 22, 2021, due to COPD related complications. Big Dave was born in Arkansas in 1941 and moved to Redlands, CA in 1944. He attended... View Obituary & Service Information

The family of David Carroll Minyard created this Life Tributes page to make it easy to share your memories.

David &quot;Big Dave&quot; Minyard, 80, made his transition from this plane...

Send flowers to the Minyard family.