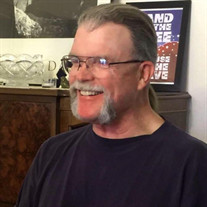 Not sure what to send?

David Conrad passed away December 19, 2021 in Highland, California. He was born to Lloyd and Jerry in May of 1955 in Upland, California. When David was born, he joined an older sister, Lynda, and some years later a younger sister, Diane came along. At five years of age his parents separated and he went to live with his father. As Dave got older both his parents remarried; Jerry to Albert, and Lloyd to Lougene. New siblings were added to the families on both sides - Karen, Lynn, and Crystal. David enjoyed his siblings, parents, and his many grandparents. He loved to laugh, play games, and go exploring outdoors with them. In David’s youth he developed many interests that held him throughout his life. He loved visiting the Mojave Desert with his Dad and his Dad’s buddies. He was a kid from the city and the desert was like going to the moon, he said. There they would camp, hike, and shoot guns. He continued to love these things his whole life. David enjoyed nature, photography, music, painting, and astronomy as well. David decided to join the military out of high school. The Vietnam war was raging and he was promised more flexibility in where he would serve if he volunteered instead of waiting for the draft. David served as a tank mechanic, which worked very well for his 6-foot 4-inch frame - as long as he was on the outside of the tank. After Army life he served a two-year mission for the Church of Jesus Christ of Latter-day Saints in Southern Idaho. He enjoyed his time there and the people he served. David lived in many places and worked many jobs during his life. Some of the places he lived included California, Germany, Oklahoma, Missouri, Idaho, Oregon, and Washington. He enjoyed driving trucks, fixing computers, mechanic work, and learning. After his adventures he always returned to California where he spent most of his life - working, trying out surfing, looking at airplanes, hiking, lifting weights, driving his motorcycle or car, camping, and visiting family. David is preceded in death by both of his parents and their spouses. He is survived by his four sisters, his brother, their spouses, nieces and nephews, their families, and many friends, who will all miss him. Services will be held Friday, January 28th at the Church of Jesus Christ of Latter-Day Saints, 11557 Redlands Blvd, Moreno Valley, CA. There will be a visitation for friends and family at 9:30 AM and the Memorial will start at 10:30 AM. Interment will be at Riverside National Cemetery.

David Conrad passed away December 19, 2021 in Highland, California. He was born to Lloyd and Jerry in May of 1955 in Upland, California. When David was born, he joined an older sister, Lynda, and some years later a younger sister, Diane came... View Obituary & Service Information

The family of David Conrad created this Life Tributes page to make it easy to share your memories.