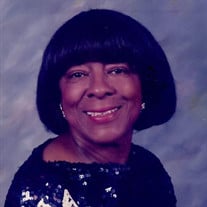 My name is Catherine Harvey and I was fondly referred to as “Cathy,” “Sista,” “Mom,” “Grandma,” Gramps,” and “Grandmommy.” I was born in Saint Louis, MO to Mary Jones and James Griffin. My three brothers (James LL Griffin, Robert [Masso] Griffin, & Leonard [Cricket] Griffin), sister (Earnestine), and I grew up together near the lively street called Franklin. I went to Prince of Peace Missionary Baptist Church. One of the happiest times of my life was later starting my own family. I had three children and raised them in Missouri and later in Los Angeles, CA. I later married my third husband, Neal Daniel Harvey, until his untimely death in 1997. I never remarried. Anyone who even thought they knew me knew that I was quick-witted and naturally funny without even trying. They also knew that I was a survivor. I was very protective of my family, and I also didn’t take any mess. I worked many years as a nurse and later ran my own child daycare center. I was an early riser and I kept a clean house and hot food on the table. I loved cooking, dancing, listening to music, singing, hosting parties, telling stories, golf, margaritas, greens, and black-eye-peas. But what I really loved was my children and grandchildren. While I suffered from Alzheimer’s disease and later a stroke, I eventually passed away from natural causes. I have united with God in whom I placed my faith many, many years ago. I reunite with my son (Richard Jones), all of my siblings, and parents. I leave behind my two daughters (Fayetta Harris and Beverly Jones), nine grandchildren (Kathy Harris, Andre Jones, Tony Jones, Yolanda Jones, Rochell Pitts, Jennifer Jones, Roxanne Jones, Darren Jones, and Brandi Jones), and ten great grandchildren (Rhys, Jamilah, Ashley, Ava, Zain, Vanessa, Aalia, Xavier, Charlize, and Leslie). I wish you live 93 or more years as I did.

The family of Catherine Harvey created this Life Tributes page to make it easy to share your memories.

My name is Catherine Harvey and I was fondly referred to as “Cathy,”...

Send flowers to the Harvey family.