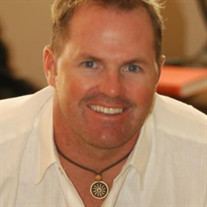 Bryan “Scott” Kirby On Monday December 27, 2021, after battling health issues, Bryan “Scott” Kirby passed away at the Temecula Hospital in Temecula, CA. He was 52 years old. Scott was born on August 12, 1969 on Andrews Air Force Base in Maryland. His family traveled/lived on Air Force bases in Germany and South Carolina, then settled in Cheboygan Michigan. In 1983, his family moved to Miles City Montana where he attended Sacred Heart Catholic School and graduated in 1987 from Custer County High School. He attended Eastern Montana College (MSU-B) his freshman year and then transferred to Rocky Mountain College as a walk-on where he played college football and earned All American Honors in 1989 and 1991. In 2012, he was inducted to the Rocky Mountain Athletic Hall of Fame. Scott always excelled at sports and loved the comradery of being part of “The Team”. After college, Scott moved to Colorado where he met his love, Amber Cox. Scott and Amber moved to California in 1999 and they married in September of 2002. In 2008, Scott and Amber brought a beautiful set of twins into this world, Jett and Izabella. He worked at California State University, San Marcos as the Director of University Corporation Facilities. Scott was a proud Dad and he loved attending Jett’s mountain bike competitions and Bella’s soccer tournaments. He loved watching Michigan football with friends on the weekends. He was full of life and loved to make people laugh. He always saw the lighter side of life and where there was a costume party, he did his best to arrive in style. Scott is survived by his wife Amber, daughter Izabella, son Jett of Temecula, CA; his sister Nancy (Scott) Schaefer and nephews/nieces Alexandra (Duane) Meiers, Veronica (Zane) Yount and Zach (Broox) Schaefer of Billings, MT; his Uncle Jack (twin of Scott’s Mom) Barber, wife Nancy and cousins Julie, Kathleen & John of Cheboygan, MI.

The family of Bryan "Scott" Kirby created this Life Tributes page to make it easy to share your memories.

Send flowers to the Kirby family.