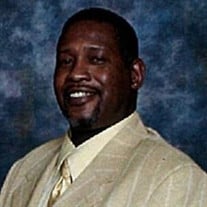 Bobby O&#8217;Neal West was born on March 24, 1958 to Burnett West and Dorothy Washington in the city of Los Angeles, CA. Bobby entered into eternal rest On May 18, 2022. Bobby was preceded in death by grandparents, Magellan and Clara Washington;... View Obituary & Service Information

The family of Bobby O'Neal West created this Life Tributes page to make it easy to share your memories.

Send flowers to the West family.