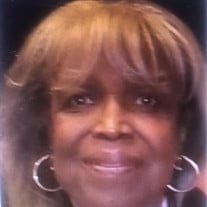 Bobbie Jean Knox-Jones was born October 19, 1940 in Hope, Arkansas to Freeman and Alzonia Hendrix-Knox. She was the fourth child of five children. Her father, mother and two brothers Ulysses and Bobby Ray preceded her in death. In 1950, Bobbie’s family moved to Los Angeles, California. She joined First Sweet Home Baptist Church where she gave her life to Christ, and also, sang in the church choir while under the pastorate of her uncle, the late Reverend James W. Wesley. Bobbie graduated from Manual Arts High school in the city of Los Angeles, California. After high school she met and married Edgar Jones Sr. Three children were blessed to this union, Rodney, Edgar Jr. and Yvette. Later in life they adopted Johnathan. Bobbie was a devoted wife, mother and grandmother. Bobbie was a housewife and a stay-at-home mom, while her children were younger. Years later she worked for Thrifty Drug Store Corporation in Human Resources in the accountant department for more than twenty years. When she retired in 1990 it afforded her more time to do things that she loved. She enjoyed going camping and fishing, and when she was not fishing, she enjoyed growing vegetables in her garden, and crocheting making quilts. She loved shopping at Macy and Kohls, and most of all talking on the phone to her family. Bobbie Jean Jones quietly departed this life on Wednesday, March 24, 2021 surrounded by her family. She is survived by her loving husband Edgar Jones Sr. of 60 years. She leaves a legacy of love and precious memories that will be cherished by her children Rodney Jones (Jennett), Edgar Jones Jr. (Nadean), Yvette Jones-Jackson (Gregory), and Johnathan Jones, six grandchildren Camille Jackson, Jason Jones, Jared Jones, Kyle Jackson, Trenton Jones and Kori Jackson, sister Eula Mae Jackson, brother Freezel Knox (Joyce), Aunt Helen Price, Aunt Elizabeth Knox, a host of cousins, nieces, nephews, great nieces, great nephews, church family and friends.

Bobbie Jean Knox-Jones was born October 19, 1940 in Hope, Arkansas to Freeman and Alzonia Hendrix-Knox. She was the fourth child of five children. Her father, mother and two brothers Ulysses and Bobby Ray preceded her in death. In 1950, Bobbie&#8217;s... View Obituary & Service Information

The family of Bobbie Jean Jones created this Life Tributes page to make it easy to share your memories.

Send flowers to the Jones family.