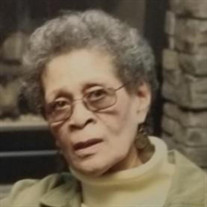 Beverly was born in Bedford CA, near San Mateo, on December 24, 1928 to Floyd Milton Henry and Catherine Lucille Temple. She was the youngest of three siblings, Larry Carruthers (preceded in death) and Lois McCoy (preceded in death). From the earliest age she was called “Chi-Wee” (a character from a popular children’s book, meaning “Little Bird”). Chi-Wee attended One Hundred and Second Elementary, Willow Brook Middle, and David Starr Jordan High schools in Los Angeles, CA. She was a noted singer in the choir during her high school years. While her mother worked as a private domestic worker, Chi-Wee was cared for by her Uncle Wookie and Aunt Helen Wilkerson. She attended the Seventh Day Adventist Church during adolescents and early teenage years; giving her a long lasting foundation in being respectful to diet, daily order, and its referential to God. In the last 12 years of her life, Chi-Wee attended Revival Christian Fellowship. On December 25, 1946, Chi-Wee married Jessie Lavall Rounds (preceded in death) in Los Angeles CA. Their marriage union produced seven children; Anthony Lavall, Mark Laval, Rae Catherine, Paula Doreen, Adriane Elizabeth, Aaron Damon, and Beverly Arlene. The family lived in Compton, Watts, and Perris, CA, during which Chi-Wee excelled in creating a warm and welcoming home. Her touch always produced a sense of Class, Good Music (of all genres), an Eye for Interior Decorating (autumn colors) and Good Food, from all ethnicities with Mexican Food being her favorite). Many community members will remember Chi-Wee as a supervisor at the Perris Medical Arts Center where she worked for 20 plus years and was awarded Employee of the Year. There she was able to hire employees, assist families, and train students for future employment. Chi-Wee retired and lived her remaining years residing in a living quarters of her son-in-law and daughter, Roy and Adriane Thomas, in Nuevo, CA. There she was able to travel, listen to Count Basie and Duke Ellington, enjoy her Family and Friends. Chi-Wee is survived by 7 Children, 19 Grandchildren (Jason Thomas preceded in death); 40 Great-Grandchildren and 2 Great-Great Grandchildren, leaving a Legacy of 5 Generations. Chi-Wee is also survived by: The Temple Family, Henry Family & Rounds Family. Immediately following the Service, The Family will be having a Reception to Celebrate the Life of Beverly "Chi-Wee" from 1:00-4:00pm at: SRCAR 26529 Jefferson Ave Murrieta, CA 92562

Beverly was born in Bedford CA, near San Mateo, on December 24, 1928 to Floyd Milton Henry and Catherine Lucille Temple. She was the youngest of three siblings, Larry Carruthers (preceded in death) and Lois McCoy (preceded in death). From the... View Obituary & Service Information

The family of Beverly "Chi-Wee" Rounds created this Life Tributes page to make it easy to share your memories.

Beverly was born in Bedford CA, near San Mateo, on December 24,...

Send flowers to the Rounds family.