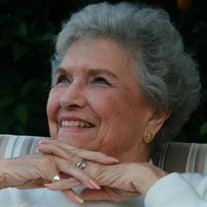 Betty Louise King passed away on Saturday, Oct. 30, in Moreno Valley, Calif. She was 98 years old. Betty was born on Dec. 7, 1922, to Frank Topel and Margaret Harrison, in Los Angeles. She was the middle child of three girls; Margaret (Tuttie), the eldest and Dixie, the youngest. Betty graduated from Poly High School in 1940 and married Homer Wilson King on Sept. 26, 1942, in a dual wedding ceremony with Wilson’s sister and Betty’s best friend Janet King and Dale Pendergrass, in Yuma, Ariz. Together, Wilson and Betty had two children: Keith, born Nov. 24, 1943; and Sherry, born July 18, 1950. While Wilson worked as a delivery driver for Farmer Bros., Betty managed the household and raised her kids. They moved to Beverly Court in Riverside in 1955 and remained in the house until Betty was moved to a memory care facility in 2017. She enjoyed gardening and together with her family created a paradise in the backyard complete with citrus and Sago palm trees. She asked her son Keith if he’d like to have a pool, and in response to his emphatic yes, began working at Harris Department Store to pay for the expense. The pool became the hub of activity in the summertime and the backyard a beloved gathering place for annual Fourth of July parties with family and friends. Betty and Wilson started King Western Shop in the early 1960s, located on the corner of Sunnyside Avenue and Brockton in Riverside. They sold saddles, tack and other supplies to loyal customers for more than 15 years. Horseback riding was central to the family’s passions; Wilson was a member of the Riverside Rancheros Horse Club and both Keith and Sherry had their own horses. Betty was creative and incredibly resourceful. Having been raised during the Great Depression, she was frugal with her money and never let anything go to waste. Home improvements were rarely outsourced and many of the drapes, quilts, placemats and aprons were sewed by her hand. She enjoyed painting, knitting, gardening and dancing, and also loved sports. Betty played golf and tennis well into her 70s and was an avid baseball fan, rarely missing an Angels game on television. She loved music and knew the words to most of the songs by her favorite artist Frank Sinatra. In fact, though her memories of her family members faded, she sang along to Frank Sinatra until the day she died. Betty was devoted to her husband Wilson, whom she referred to affectionately (and often loudly) as “babe.” She never parted with him without a kiss goodbye. Betty and Wilson traveled the country together via motorhome, visiting many landmarks including Niagara Falls, the White House and Mount Rushmore. They often traveled with Janet and Dale, Betty’s sisters and with their kids and grandkids. Camping was a particularly favorite pastime, both in the mountains and on the beach. Betty would often play cards with the grandkids and prepare the day’s catch in a cast iron pan over the campfire. Wilson passed away on Sept. 16, 2002, one day before his 85th birthday and just 10 days before their 60th wedding anniversary. Betty stayed close to home following his death but continued to enjoy the company of her kids, sisters, grandkids and close friends. She enjoyed going to the movies, to plays and out to dinner, where she’d always insist on a booth and ask the server to please turn down the music and the air conditioning. At 88, Betty fulfilled a lifelong dream to visit Jerusalem, Israel, much to the astonishment and apprehension of her kids. She continued to host Fourth of July parties into her early 90s and regularly went to Keith’s home for family gatherings. She often visited Sherry and her family in Colorado while Wilson was alive, but only a few times following his death. Betty objected to the cold and snow and couldn’t understand why anyone would want to live anywhere else but in southern California. Though she married into it, Betty was recognized as the matriarch of the King family. She ran a tight ship and wasn’t shy with her feedback. As someone who never had a hair out of place, she was quick to point out when someone in her company did. She would often spend her mornings sipping coffee, reading The Press-Enterprise and applying polish to her nails. Betty insisted on “putting her face on” before leaving the house, quickly reprimanded anyone who dared drive with the windows down (doing so messed up her hair) and was quick to reapply bright pink lipstick after affectionately kissing her grandkids. Betty’s passing is the end of an era for her family. Though her memories were taken from her during her last years, the imprint she left on the hearts of all who knew her will remain. Betty is preceded in death by her husband, her sisters and her daughter. She is survived by her son Keith and daughter-in-law Jan; her son-in-law Richard Grossmann; grandkids Brian, Cindy, Billy, Garrett and Kendal; great grandkids Julia, Jeanette, Janice, Krista and Declan; her great great granddaughter Ellianna; nieces Jody and Terry and nephews Tom and Dave. No funeral services will be held. A private memorial with Betty’s family is planned for a later date.

Betty Louise King passed away on Saturday, Oct. 30, in Moreno Valley, Calif. She was 98 years old. Betty was born on Dec. 7, 1922, to Frank Topel and Margaret Harrison, in Los Angeles. She was the middle child of three girls; Margaret (Tuttie),... View Obituary & Service Information

The family of Betty Louise King created this Life Tributes page to make it easy to share your memories.

Betty Louise King passed away on Saturday, Oct. 30, in Moreno...

Send flowers to the King family.