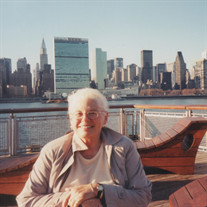 Barbara Truncale, 91, of Sun City, California, died at home on Saturday, February 6, 2021. She was born, Helen Barbara Fordham, in New York City in 1929. Her mother was Helen Collins McCarthy. She is survived by her son, Mark Truncale and his wife Pamela Petersen, and her daughter, Lynn Truncale and her spouse Patricia Zarate. She is also survived by her grandchildren, Erica Truncale-Shepherd, Kristen Truncale, Arianna Truncale and Anthony Truncale, and her great grandchildren, Hailey Shepherd, Gianna and Angelo Truncale. As a young teen, Barbara would roller skate to the Museum of Natural History where she would wander for hours. And at the Metropolitan Museum of Art, she was fascinated with the Egyptian exhibits. Barbara studied photography at the High School of Art and Design in Manhattan. She found work in various offices when she was starting out and finally worked at the Auto Club of New York where she found her interest sparked for the travel industry and her own love of travel. She married Charles J. Truncale, who she knew from high school, on September 30, 1950 at Holy Trinity Catholic Church in NYC. Charles was an artist and fashion illustrator of note. After he returned from service they began their family and soon moved to Blauvelt, NY. Barbara took care of the children and household while Charles grew his career. In 1969, she was widowed and raised her family with the great fortitude she is remembered for now. She moved to Rancho Bernardo in San Diego, CA in 1971 for a different life for the family. There, she found work again as a travel agent and continued this career until retirement. She traveled to many places in the world as a travel agent – Australia, Japan, Fiji, England, Alaska, Hawaii – among others. She enjoyed telling stories of fishing in Alaska, the real Boston clambake, the Japanese ceramics factory and the shrine, the pints she and a friend drank in an English pub and felt fine the next day. She had a framed map of the world filled with red pins marking all of the places she visited. Barbara was also very involved in her children’s lives, which involved lots of sports and music. She cooked pasta for the team before the games and was a band mom. She liked participating in her community, volunteering at the library or the PTA, and was always present at school events. She was also a great reader and loved needlework and knitting. She moved to Casa Blanca Villas in Sun City, CA with her mother in 1992. After retiring, she was finally able to join her friends there in many activities. Sitting around the card table or at the crafts group were some of her favorite ways to be with her friends. She knitted and crocheted many blankets and hats for veterans. She returned to photography, taking advantage of having grandchildren as subjects. After her health problems made it difficult to continue at Casa Blanca Villas, she moved to a residential apartment in Sun City Gardens. There, she quickly became involved in the community as Treasurer of the Resident’s Committee and successfully worked to increase the funds raised for the year-end gift to the staff. She took the lead in reorganizing the library, requested safety cameras and mirrors for the hallways, always thinking of what could be made better. She was awarded resident of the year for her outstanding efforts by the ownership group during the company’s 50 year anniversary party. She also continued meeting with friends there around the card or bingo tables and made many paintings in the watercolor class, which she loved. Barbara’s family remembers her as one of the strongest people they know. Raising two children on her own, maintaining a career and her own interests, surviving breast cancer and surviving her disability as a result of diabetes and then continuing to thrive. She always looked forward to what she could do to take care of herself and to enjoy her life. She inspired her children and grandchildren with that strength and the wisdom and advise that came from it. She beat the coronavirus, too. She made it home after the ordeal, but the angels called her to their side. She is loved and will be greatly missed.

Barbara Truncale, 91, of Sun City, California, died at home on Saturday, February 6, 2021. She was born, Helen Barbara Fordham, in New York City in 1929. Her mother was Helen Collins McCarthy. She is survived by her son, Mark Truncale and his... View Obituary & Service Information

The family of Barbara Truncale created this Life Tributes page to make it easy to share your memories.

Barbara Truncale, 91, of Sun City, California, died at home on...

Send flowers to the Truncale family.