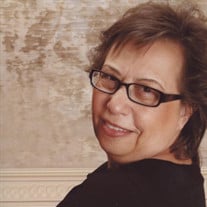 Yolanda “Guera” Tovar caring wife, mother, grandmother, sister, and friend passed suddenly on April 13, 2021 at age of 69. Yolanda was born in Victoria, Texas on August 13, 1951, to Isabel and Carmen Pacheco, of San Antonio and Lyford Texas, respectively. The Pacheco family resided in Texas until 1953 upon relocating to Ohio. In 1957 when Yolanda was in the third grade of elementary school. The family relocated to Bakersfield, California, and it is where she came into the lives of so many friends that celebrate her life, and mourn her loss, with us today. After years of acquaintance, Yolanda began dating her spouse, Pilar J. Tovar Jr. during her sophomore year of high school. Yolanda and Pilar married on January 5, 1973 in Riverside California. Soon after marriage, she began her toughest and most loved career as a mother to three daughters. While each of them is unique in their own way, she honestly would say that she loved them watch the same. After graduating from Perris High School in 1969 she immediately began her career at General Telephone & Electronics. Yolanda began her journey with the Telephone Company as an Operator, and was promoted may times over the years, until she assumed her final position as a Facilities Surveyor. Along the way, she earned various performance accolades and achievements. She was known to possess a strong work ethic and was often described as pleasantly proficient, dependable, hardworking, diligent, and a strong and congenial communicator, Yolanda retired in 2013, after 43 years of dedicated service. Upon retirement, Yolanda filled her days doing good works for her family and friends. She was often found in her garden, tending to her expansive collection of plants, or conversing with friends and neighbors. Yolanda would often share photographs of her picturesque plants and the hummingbirds that would come to the nest in the flowers, year after year. She loved spending quality time, in person, and on, and on the telephone with her children and grandchildren. She took great pleasure in baking treats for her family, friends, and neighbors during the holiday seasons. Yolanda was special in that she was kind to everyone and always put the needs of others before her own. She sought to find the good in people that others would often overlook. Yolanda was, and is, the glue that held her family together – which was a trait that she obtained from her own mother. Yolanda is survived by her spouse of 49 years, Pilar J. Tovar her children Veronica, Sabrina, and Marissa, and her grandchildren Victoria and Alexander. Yolanda is the seventh child of twelve siblings. Her surviving siblings are Tomas Pacheco, Matilda Lopez, Placido Pacheco, Albert Pacheco, Virginia Marquez, Rafael Pacheco, and Danny Pacheco. She is predeceased by siblings Carmen Cardenas, Johnny Pacheco, Hortencia Brees, and Emilio Pacheco. We will forever carry her memory in our hearts. In spirit, she will remain with us, always

The family of Yolanda Tovar created this Life Tributes page to make it easy to share your memories.

Send flowers to the Tovar family.