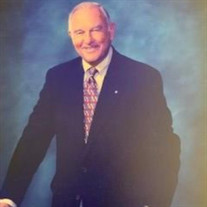 Walter L. Scholey, born in Detroit, Michigan, passed away in Menifee, California on January 21, 2022. He was 96 years old. Walter is survived by his wife of 71 years, Charlene, their four children, Ann (Timothy), Leland, Nancy (Peter), Rosalind (Kevin), seven grandchildren and four great-grandchildren. The only son of Everett T. and Lydia Scholey, Walter’s childhood was filled with family outings, often to the Muskoga Lakes in Canada with his dog Laddie. Upon graduation in 1943 from Cooley High School, where he starred in track and basketball, Walter entered the Navy’s V-12 Officer Candidate School (OCS) program at Middlebury College in Vermont. In April 1945 he was commissioned an Ensign in the USNR and received orders to report for duty aboard a minesweeper in the Pacific. Following the war, he used the GI bill to earn a Mechanical Engineering degree from the University of Michigan. Walter began a long career with Champion International Paper Company which included positions in sales and senior management, moving the family from Ohio to New Jersey to Texas. In 1966 he was named President of Federal Envelope Company and moved to Los Altos, California. Walter felt like he had arrived in the land of milk and honey and decided to remain in the Bay Area. He served as President of Federal Envelope until he retired in 1985. In 2003 Walter and Charlene moved to southern California to be closer to children and grandchildren. In 1950 while on a business trip to Moultrie, Georgia he met the love of his life, his Georgia peach Charlene. It was love at first sight for both of them, and after a courtship of 3 months they married on August 18, 1950 in Valdosta, Georgia. Their fairy tale-like romance continued for 71 years. Growing up, Walter’s children were somewhat in awe of him. He was larger than life. Family life was simple: the family gathered at the dinner table each night; education and sports (especially golf) were highly valued; there were multiple pets (mostly dachshunds), fun celebrations with lots of friends, quirky family vacations and later in life, family reunion cruises to Mexico and Alaska. Dad’s exuberance for living and joy and pride in his family infuse his children’s lives to this day. Walter and Charlene made life-long friends wherever they lived. People loved to be around the two of them. Walter was inspirational, a natural leader and a lot of fun. He used his abilities and expertise to better the churches, organizations and companies he joined. Two volunteer positions of which he was most proud were President of Los Altos Country Club (1978) and his service to the Los Altos Chapter of the Rotary Foundation. A book could be written about Walter’s extraordinary life, and in fact he did write an autobiography titled “We Don’t Always Do Things Right, But We Do Them Spectacular.” The book focuses on life philosophies that made Walter what he was: one of the greatest of the Greatest Generation. All who knew him would agree with that. During the final week of his spectacular life, his family was again in awe of his bravery, dignity and sense of humor. He was able to look out the window at the view he relished for so many years. Although he and Charlene had traveled the world, it was his backyard he loved most - sitting out on the patio with a glass of wine to savor the sunsets, playing gin rummy (and usually winning), golf putting, pruning his mini-orchard of which he was very proud, reading, or conversing on just about any topic that anyone wanted to bring up. Apart from his love for Charlene, his faith was the bedrock of his life. Although he continually challenged the church to better meet the needs of humanity in today’s world, he never wavered in his belief in a loving Creator. At the end, he was ready for Zion and faithfully embraced his new life in God. Walter will be interred at Riverside National Cemetery. Information about his memorial service will be provided at a later date.

The family of Walter L. Scholey created this Life Tributes page to make it easy to share your memories.

Walter L. Scholey, born in Detroit,
Michigan, passed away in...

Send flowers to the Scholey family.