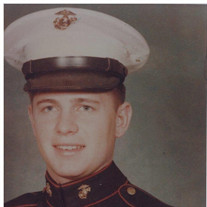 Beloved Walt Rhodes Walt was born 07/01/1947 in Fort Benning GA. He was raised in Rome GA. With his beloved sister, Patricia. He joined the Marine Corps when he was 17 years old. He advanced to Sergeant and has been very proud of America and his Military career his entire life -“Semper Fi” Walt and I met in San Diego, while he was still in the Marines and I was a new R.N. - It was “ love at first sight”, and has lasted 54 years. God blessed us with 2 beautiful children- Dean and Leigh, and 4 beautiful grandchildren, Justin, Ryan, Taylor, and Morgan- all of whom he loved dearly. Walt had a very successful career in the Banking Industry for 30+ years and rose to Vice President. He was quite the daredevil and loved life to the fullest. Some of his other accomplishments were: Bungee jumping, paragliding, and single parachute jumping -but his greatest love was piloting his Cessna 172 airplane! Walt was very caring and loving. He would do anything for his family and his friends. He too was loved by all. When we moved to the “Oasis” upon retirement, he was active in the “blood drive”. He went on to run it for several years and felt a deep obligation to donate regularly. He was also a member of the “Veterans Club”. He had many charitable activities he participated in over the years. It was just in his kind, giving and loving nature. He will be dearly missed by all he touched. Goodbye my love. You’re at peace with God now, but I miss you most. Forever love, Joan Walter Donan Rhodes Jr. Obituary Walt was born 07/01/1947 in Fort Benning Georgia to Walter Senior and Ruby Rhodes. He is survived by his beloved wife Joan of 54 years. Two children, Dean Rhodes and Leigh Buchnoff. Four grandchildren, Justin, Ryan, Taylor, and Morgan. Also his sister, Patricia Stansell and nieces, Shannon and Shalene . Walt retired as a Bank Vice President after 30+ years. He and Joan retired to “The Oasis” in Menifee Ca. , where he actively ran the blood drive. He was also a member of the Veterans club. He was a very proud former Sergeant in the Marine Corps. Walt was quite a daredevil. He did bungee jumping, parachute jumping, flew in a glider, and piloted his beloved Cessna 172 plane. Most of all, Walt will be known as a kind and loving husband, father grandfather and friend. He will be forever loved and missed by all. Burial services will be held on November 5 2021 at Riverside National Cemetery. In lieu of flowers, donations can be made to The Oasis Veterans Club @ 29100 Midway Summit Rd. Menifee, Ca 92584

Beloved Walt Rhodes Walt was born 07/01/1947 in Fort Benning GA. He was raised in Rome GA. With his beloved sister, Patricia. He joined the Marine Corps when he was 17 years old. He advanced to Sergeant and has been very proud of America and... View Obituary & Service Information

The family of Walter D. Rhodes Jr. created this Life Tributes page to make it easy to share your memories.

Send flowers to the Rhodes family.