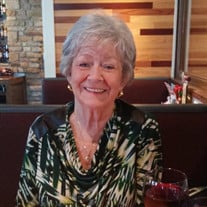 V. Dolly Chambers Virginia (Dolly) Chambers, age 78 resident of Banning, CA was born September 5, 1943 in Dothan Alabama, raised in South Georgia, and moved to San Jacinto, CA at 17 years of age, entered into eternal life April 14, 2022 due to COPD. She was predeceased by her parents, Polun and Gladys McKeen; 9 siblings and 2 grandchildren. Dolly is survived by her husband of 42 years, John Chambers, whom she married in 1980; two children from a previous marriage Fawn Steffen and Cameron Lunsford, step-children Karen Gibbons, Jeff Chambers, and sister-in-law Carole Dellevar, all of Hemet, CA, also step-son Brian Chambers (Heather) of Boise, ID. Her blended family included 9 grandchildren Scott Steffen (Hemet), Chauntay Donahue (Mentone), Tyler Lunsford (Loomis), Beth Gibbons (Long Beach), Michael Gibbons (Hemet), Shasta Slavkovsky and Maxwell Chambers both of (Boise, ID); Terra Chambers and Johnny Chambers (Hemet); Great-grandchildren include Jeramiah and Miara Donahue (Mentone). Dolly also leaves behind loving sisters Judy Bird (Dalton, GA) and Vecoy Hutto (Atlanta, GA). Dolly both lived and worked in the San Jacinto valley. She had a distinguished 35 year-career in the banking industry, before retiring in 1999. She was employed by various local banks including Bank of Hemet, Inland Savings, and Valley Merchants. Many longtime San Jacinto Valley residents knew Dolly by her winning smile and sparkling personality. Her clients often referred friends to Dolly for banking needs, telling them “If you want to get it done see Dolly”. Dolly was also a long time Board Member of the American Institute of Banking, Riverside County chapter promoting banking education. In 1984 Dolly was selected Business associate of the year by the American Business Woman’s Association, Hemacinto chapter. Dolly had a strong sense of community service beginning with the Hemet-San Jacinto Jayceettes, YMCA Board Member, Local fund-raising chair for the Ramona United Way, and ending as a volunteer for Hemet Valley Hospital Auxiliary. She was also very involved in the San Jacinto Chamber of Commerce serving in many capacities including President in 1984-85 and in 1999 was selected the San Jacinto Valley Citizen of the year. She also served as the first female president of the San Jacinto Rotary Club in 1993-94. Dolly loved Jesus, her blended family and America. She was a great role model and will be missed. A celebration of life will be held at Hemet Elks Lodge on Sunday April 24th at 2pm. In lieu of flowers the family requests that you support veterans through the organization of your choice.

The family of Virginia "Dolly" Chambers created this Life Tributes page to make it easy to share your memories.

Send flowers to the Chambers family.