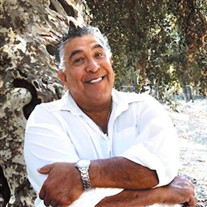 Thomas Silva, 75, passed away on Thursday, February 17, 2022 at Eisenhower Medical Center in Rancho Mirage, California after a brief illness. He was surrounded by his family. Born in Brawley and raised in the Coachella Valley, Tom was the eldest son and was one of seven children. As a child he shouldered a great deal of responsibility, and he developed a strong work ethic that began by harvesting in the fields to help support his mother and siblings. That strong work ethic served him well in school with academics, and his true passion, football. Tom excelled as a defensive player and was a leader on and off the field, earning a full ride football scholarship to Northern Arizona University. He was a natural protector and a champion of the underdog- because he was one. Tom chose a career in education where he taught at risk youth in the alternative education and court school settings. He served his students as an educator, a mentor, and a coach. He loved sharing his passion of sports with his students and sharing his personal story showed his students that an alternate, crime-free path in life was possible. Tom was living proof that one could rise above their circumstances, and it was not uncommon throughout the years to have former students recognize him in public and share how he had made a difference in their lives. They were always proud to share how well they were doing and often credited his influence to their success. Tom was a constant joker, and you’d be hard pressed to find a better storyteller. He loved laughing and he loved life. The beach, hiking, camping in Yosemite, traveling, and spending time with his family and friends is what brought him joy. Always a fan of simple pleasures, he loved nothing more than enjoying good company, good food and a cold beer with those he loved. There are no words to express how much he will be missed. Tom is survived by his children; Andrew Silva (Mary), Keri Jacobson (Michael), Thomas E. Silva, and Lauren Silva, His 3 grandchildren; Hailey Jacobson-Boggs, Gemma Silva, and Sean Rodriguez. He is also survived by his long-time companion, Leslie Conner Silva. Siblings; James Silva, Theresa Silva, and Charles Silva. He was preceded in death by his mother, Genevieve Silva, and siblings, Edward Silva, Mary Silva, and Frank Silva. A celebration of life will be held at JPL Church in Rancho Mirage, California on March 25, 2022 from 10:00 AM –12:00 PM. In lieu of flowers, the family asks that you would consider a donation to the Thomas Silva Memorial Scholarship that is being established in his honor.

Thomas Silva, 75, passed away on Thursday, February 17, 2022 at Eisenhower Medical Center in Rancho Mirage, California after a brief illness. He was surrounded by his family. Born in Brawley and raised in the Coachella Valley, Tom was the... View Obituary & Service Information

The family of Thomas Silva created this Life Tributes page to make it easy to share your memories.

Send flowers to the Silva family.