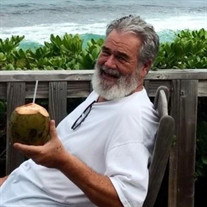 Theodore Edward Tielens "Ted" from Hemet, California passed away on March 30,2021 peacefully at his home after a long battle with cancer. Ted was born on February 12, 1951 to Maurice Adrian Tielens (Abe) and Mary Schumacher Tielens in Los Angeles, Ca. Ted married his high school sweetheart, Vicky Broadaway, in 1970 a year after graduating from Hemet High School in 1969. Ted joined the U.S. Navy after high school and proudly served is country for 11 years where he achieved the rank of 1st Class Petty Officer as an Aviation Electronics Technician. During his time in the Navy he was stationed in Washington, Spain, Maryland, and Tennessee. Ted's background of teaching electronics began in the Navy. After his discharge from the Navy, Ted worked at Litton in Thousand Oaks, California before taking over the family business, Save-On Supply, in Winchester, California. During this time he completed his masters degree and began teaching at Mt. Jacinto College and Alessandro High School until his retirement in 2019. Ted loved fishing, beach combing, and teaching his children about the stars. Ted was a huge presence in the lives of his family and friends and will be greatly missed. He will be forever remembered as a great storyteller and loved by all that knew him. He loved his family and friends and would do anything for them. He is survived by his wife Vicky, of Hemet, California, his two daughters Christine Harrison of Hemet, California and Jennifer Harrison of New Braunfels, Texas. As well as his grandchildren Jessica Petite, Cannon Hodson, Riley Hodson, Jade Harrison, and two great granddaughters, Audree and Allison. He is preceded in death by his parents Abe and Mary Tielens and his younger brother James Dean Tielens. Memorial reception to be determined.

Theodore Edward Tielens "Ted" from Hemet, California passed away on March 30,2021 peacefully at his home after a long battle with cancer. Ted was born on February 12, 1951 to Maurice Adrian Tielens (Abe) and Mary Schumacher Tielens in Los Angeles,... View Obituary & Service Information

The family of Theodore Edward Tielens created this Life Tributes page to make it easy to share your memories.

Send flowers to the Tielens family.