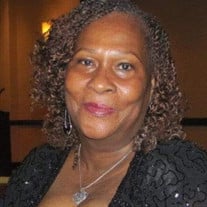 Thelma Martinez of San Bernardino, California peacefully passed away on March 4, 2022, in Vicksburg, Mississippi surrounded by family, she was seventy-two. Thelma was born on January 23rd, 1950, to parents Robert and Clara Bell Bryant in the rural city of Newellton, Louisiana. She was the ninth of ten children, the youngest girl. Thelma was frequently and adorably referred to as the "baby sister". Thelma attended Temple High School where she enjoyed playing basketball. At an early age she became a mother, and her four children were the joy of her life. Thelma lived in various states before she and her family relocated from Chicago, Illinois to Los Angeles, California in July of 1980 to make it her new home. Thelma worked for Del-Gen a contractor at the Los Angeles Air Force Base, supporting special space and satellite programs for over 20 years before retiring. She met her long-time companion Lorenzo “Lo” Martinez in 1992 and they later married on 15th of December 2004. Thelma was a very caring, kindhearted woman who loved and lived life to the fullest. She loved to dance, laugh, and have a fun time. She referred to herself as a “people person”. Thelma was a Christian woman who loved the Lord and people; and as the saying goes “never met a stranger”. Thelma had a unique gift of connecting to everyone she met. She was a refuge and confidant to many. She was always ready and willing to help whoever needed her without hesitation. Thelma opened her heart and home to many over the years. Thelma was a loving mother, grandmother, sister, aunt, and friend. She is loved, admired, and will be missed by all of us. Thelma was preceded in death by her husband Lorenzo Martinez, parents Robert and Clara Bell Bryant, grandson Ramon Smith, great-grandson Peace, siblings Ernie Jones, Melvin Bryant, Douglas Bryant, and Quincy Bryant. Thelma leaves to cherish her memory her four children: Raymond Smith Jr of Troy, AL, Leon Terrell Smith of Marrero, LA, Latonia Yvette Wilson (Derick) of Winchester, CA, Julonda Lakesha Johnson of San Bernardino, CA; two brothers: Robert Bryant Jr (Betty) of Franklin LA, and John “Butch” Bryant of Baton Rouge, LA; three sisters: Lillian Walker of Vicksburg, MS, Annette Pilgrim of Compton, CA, Bettye Woods (Willie) of Los Angeles, CA, and one sister in-law Eddie B. Bryant of Vicksburg, MS; fifteen grandchildren: Raykeisha Taveras (Michael), Jamal Smith, Jovana Smith, Javian Smith, Je Aughnna Smith, Jaylen Smith, Shi’Ann Smith, Cameron Smith, Kendrick Smith, Jasmine Burton, Derick Wilson Jr, Maya Wilson, Deandre Cannon, Ashley Rose and Daveon Johnson; twelve great-grandchildren: Anilah, Ameelah, Ty’vana, Javian Jr, Jah’vantae, Jaceon, Victoria, Devonta, Deandre Jr, Kenneth, True, Terri’eon, and many nieces, nephews and other family and friends who loved her.

Thelma Martinez of San Bernardino, California peacefully passed away on March 4, 2022, in Vicksburg, Mississippi surrounded by family, she was seventy-two. Thelma was born on January 23rd, 1950, to parents Robert and Clara Bell Bryant in the... View Obituary & Service Information

The family of Thelma Martinez created this Life Tributes page to make it easy to share your memories.

Send flowers to the Martinez family.