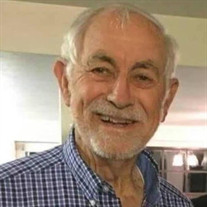 Life Long Hemet resident, Terry Lasater, died peacefully at home, Tuesday September 7, 2021, surrounded by his family Terry was born May 11, 1933. He served his country joining the United States Air Force in May 1953, stationed first in Shepard Texas, and finishing his enlistment at Hamilton Air Force Base in Northern California. He was awarded the National Defense Service Medal for his excellent performance. Terry married his High School Sweetheart, Elaine Howe, in June 1953. They enjoyed 54 happy years together raising 8 children, spoiling 21 Grandchildren, and 21 Great Grand Children. Elaine died on July 07, 2007. Completing his Air Force service, Terry took up the family trade and was a plasterer, owning his own business, Lasater Plastering, for almost 70 years. He was a perfectionist at his craft, and he left his mark on residences, businesses, and public buildings throughout the valley. Terry enjoyed fishing with friends, gardening in his backyard, and cooking wonderful meals. But he rejoiced most spending any time he could with his large and ever growing family. Terry is survived by: Daughters Jan Merrick, Kim Bach, Cherrie Lasater, son Tom Lasater--all living in Hemet; His sons Tim Lasater of the Netherlands, Terry Lasater of San Jacinto, Daughters Tina Lasater of Moreno Valley, Vickie Rieger of Concord; And his sister, Linda Parkman, of South Carolina. Terry is now in Heaven, catching the big fish, reaping the bounty of his garden, cooking up a storm, and once again . . . in the loving arms of his wife, Elaine. In lieu of flowers please make a donation to St. Jude Children’s Research Hospital. https://www.stjude.org

The family of Terrel Lasater created this Life Tributes page to make it easy to share your memories.

Send flowers to the Lasater family.