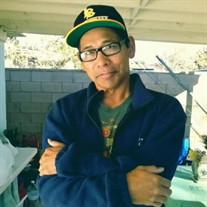 Teodoro Taluban Jr. - “Gift of God” Proverbs 3:5-6 “Trust in the Lord with all your heart and lean not on your own understanding, in all your ways acknowledge him, and he will direct your path.” Teodoro Taluban Jr was born to Natividad Directo and Teodoro Taluban Sr. in Tacoma, Washington, April 1956, as the 5th child. He is survived by his siblings Evelyn, Thelma, Jahna, Randy, David, and Richie. As a child Ted traveled with family to Germany, Arkansas, Maryland, Oregon, and more. He attended Mt. Miguel High school where he played on the soccer team & became an avid photographer. At San Diego State University he met the love of his life Melissa, participated in Samahan Softball, and was involved with the Filipino college community. He later transferred to Cal State Long Beach, and majored in quality assurance engineering. He married his sweetheart in 1988, and became a christian who attended Calvary Chapel. He became a proud father to Coral 5 years later in 1993, and she was the apple of his eye. After living in Seal Beach, the family moved to snowy Colorado and later to Temecula. During those years Ted was an active member of local churches, and would lead H.I.S. Club for the kinder kids. For Christmas time, he would regularly work for the Salvation Army as a bell ringer. He was diagnosed with Frontal Lobe Dementia in November 2014, but didn’t let that prevent him from participating in family events and enjoying the simple joys of life. He started attending Simchat Yeshua with Melissa, a messianic Jewish synagogue, and found joy in dancing to the Hebrew music each week & learning about the Torah's Jewish roots. When he moved to Terracina post acute in February 2017, it was a difficult transition for the whole family. He became close with all the staff in Back Hall Station 2, including Sheree, Sylvia, Carmen, Maria, and Latasha. Ted loved to bring his family hiking, camping, and fishing together. He loved family reunions, and was at his happiest when he was surrounded by his loved ones. He was a hard worker, loyal, supportive, and was always willing to serve others practically. He was most known for his love for the outdoors, his love for his family and his dog, his delicious oatmeal chocolate chip cookies, and his devotion to God. Some of his favorite catch phrases were “Hey, is for horses” and “Trust in the Lord Always”. He was an amazingly gentle and patient man, and we will forever be grateful for his presence in our lives.

The family of Teodoro Morales Taluban Jr. created this Life Tributes page to make it easy to share your memories.