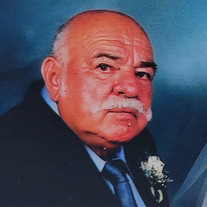 Silvino Gomez Mejia, 88, of Hemet passed away on Friday, February 11, 2022, in Hemet, CA. He was born on Saturday, October 28, 1933, to Jose Plutarco Gomez and Maria Guadalupe Cervantes in Tijuana, B.C. Mexico. At a young age, Silvino met his wife, Magdalena Durazo de Gomez, and they wed in 1951, going on to have 10 children, Sylvia Altamirano, Lilia Delgado, Virginia Parra, Leticia Osuna, Yolanda Mendez, Arturo Gomez, Gabriel Gomez, and Magdalena Gomez. He was a truck driver for 40 years and was a hard worker. Silvino was a force of nature, determined to provide for his family and give them the life he felt they deserved. His family meant more to him than anything else in the world, something he often mentioned. He was unendingly proud of his wife, and children and always tried his best to support them. He also enjoyed his 22 grandchildren and 31 great grandchildren. Silvino enjoyed watching the news, eating but he never forgot about his daily exercise. He loved Chinese food or a good In-and-Out Burger. He also liked telling jokes and making people laugh. He would often reminisce about his young years as a truck driver. He would often be found at family gatherings when he wasn’t home. Spending quality time with family was what he enjoyed the most. Anyone who knew him knew that he was the most loving father, husband, and grandpa a family could ask for. He was predeceased by his parents, his wife Magdalena, his sons Silvino Gomez, Eduardo Gomez, his brother Ramon Gomez and his two sisters Ma. Concepcion Ramirez and Martha Torrez. He is survived by his 8 children, 22 grandchildren and 31 great grandchildren.

The family of Silvino Gomez Mejia created this Life Tributes page to make it easy to share your memories.

Silvino Gomez Mejia, 88, of Hemet passed away on Friday, February...