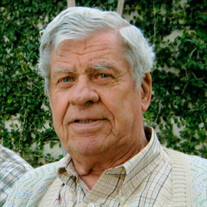 Scott W. Monson August 19, 1933 – November 1, 2021 In Loving Memory With his children and wife of 65 years by his side, our beloved husband, father, grandpa, and great-grandpa passed peacefully in Wildomar, CA. He spent his final days in the comfort of his home, and took his final breath while listening to John Denver's “Take Me Home, Country Roads”, which was a favorite song. Scott was born August 19, 1933 in Hyrum, Utah, to Gladys (Rappleye) & James Clark Monson. He was the first in his family to attend college, graduating from Idaho State University, and he later also earned a Master of Business Administration degree at William and Mary College. He married the love of his life, June McLaughlin, on February 14, 1956, at St. Mary’s Catholic Church, in Caldwell, Idaho. They had five children – Scott (spouse, Sandy), Susan, Mary, Thomas, and Karen – who blessed them with thirteen grandchildren and ten great-grandchildren, with one more on the way. He worked tirelessly to provide for his family, working as an engineer and contract negotiator at Interstate Electronics Corporation for 35 years prior to his retirement. He will be fondly remembered by family and friends as an honest man of few words, who enjoyed the opera, camping in Idaho, travelling the country and overseas, and building and working with his hands on various projects inside and outside the home. Scott was a longtime member of the Elks Lodge, most recently the Lake Elsinore/Wildomar Lodge #2591. Later in life, Scott was baptized into the Roman Catholic faith and his home parish was St. Frances of Rome, in Wildomar. Above all, his greatest joy was to be surrounded by his loved ones at frequent family and friend gatherings that he and June hosted at their home in Orange, California, and which continued after their move to Wildomar, California. His family is comforted in knowing that he was greeted at the gates of Heaven by his youngest daughter, Karen, who preceded him in death in 1989. Scott’s celebration of life will be held at San Antonio de Padua Catholic Church in Anaheim Hills, CA on November 12, 2021 at 11:00am.

Scott W. Monson August 19, 1933 &#8211; November 1, 2021 In Loving Memory With his children and wife of 65 years by his side, our beloved husband, father, grandpa, and great-grandpa passed peacefully in Wildomar, CA. He spent his final days... View Obituary & Service Information

The family of Scott W. Monson created this Life Tributes page to make it easy to share your memories.

Send flowers to the Monson family.