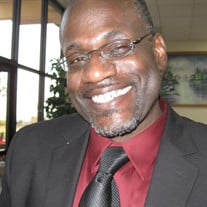 Beloved and a good friend in Christ Jesus, Samuel Michael Williams, age 55 years old and passed away peacefully early in the morning on August 31, 2021 due to complications of multiple sclerosis (MS). He was born November 11, 1965. Detroit Michigan to Samuel Ward (preceded in death) and Mary Williams. He married a family church friend Valerie Antoinette Williams on January 31, 1999 (21 years ago). Back then, Sam worked as a beverage distributor as a team-member for the Pepsi company while they lived in Lorton, Virginia and Washington,DC. They both attended Valerie’s home church of first Baptist Church of Merrifield, Falls Church Virginia, Pastor Lynwood Graham. This is where Valerie had attended for over a decade almost two. In Riverside, California they first attended a non-denominational church and later became members of Trinity Baptist Church of Moreno Valley, California, pastor Dr. Joseph L Gueste and 1st lady Dr. Verdene Gueste. Until COVID-19 struck all communities Samuel and Valerie often attended fellowship and participated in multiple ministries of Trinity Baptist Church. In 2000 they moved to San Diego, California. Sam worked as a fire and sprinkler technician and later became a contractor for federal contracts in fire and sprinkler systems on military bases. Last, Sam worked several years for the San Diego ship-building yard helping build and restore ships for our military. Not soon after moving to riverside California was Sam diagnosed with multiple sclerosis. His life was a living example of his favorite Bible verse, Ephesians 4:32 — “And be kind and compassionate to one another, forgiving one another, just as God also forgave you in Christ.” No matter who you are Sam treated everyone the same. Samuel is survived by his wife, Valerie. Preceded in death his brother Robert Williams and his children surviving are surviving his son Jamal, daughters, Monique and Bri’ona McKinney. Surviving is his mother Mary Fridy and sister Denise Fridy and her children, Sean, Sierra, Jevon, twins Darius and Denaysha Fridy. He was also an extremely proud papa to his one son Aaron Hargrove and his children. Surviving Aunts are Margaret Willis Gloria Humphrey and Jean Humphrey. Uncle's Joseph Williams , Richard Caples, preceded by late uncle's James Williams, Barry Caples. Everyone will remember Sam’s smile and his cheerful attitude. His bright smile will be missed at the church where he worshiped and greeted people at the doors of Trinity Baptist Church, Moreno Valley, California. Please join us celebrating his life Wednesday morning September 22, 2021, between 10:00 a.m. — 12 Noon & will take place a 29175 Ironwood Ave, Moreno Valley, CA 92555. Officiating Pastor Joshep L Gueste. A graveside ceremony will be held on Wednesday, September 22, 2021 at 1pm at Veterans Memorial Riverside National cemetery: 22495 Van Buren Blvd, Riverside, CA 92518-2740.

Beloved and a good friend in Christ Jesus, Samuel Michael Williams, age 55 years old and passed away peacefully early in the morning on August 31, 2021 due to complications of multiple sclerosis (MS). He was born November 11, 1965. Detroit... View Obituary & Service Information

The family of Samuel Michael Williams created this Life Tributes page to make it easy to share your memories.

Send flowers to the Williams family.