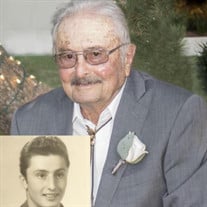 Sam James Cabibbo was blessed with a full life to the age of 93. He is survived by his four adult children: Tina Cabibbo Padilla, Mike Cabibbo, Matthew Cabibbo and Marco Cabibbo; Three daughters-in-law: Barbara, Jill and Dawn; Thirteen grandchildren: Jennifer, Jason, Jeff, Dana, Christopher, Marissa, Vanessa, Renny, Natalie, Nicholas, Daniel, Erica and Gina; two great-grandchildren: Denise and Payten. Sam was married to Marie DeSario for 63 years until she passed in 2010. Sam and Marie had six children during their marriage, two of whom had passed before them: Jim and Denise. Sam enlisted in the US Navy to fight in World War II at the age of 17 and needed special permission from his parents to do so. His service in the US Navy started on August 11, 1945 and he was honorably discharged on July 16, 1946. He received the Victory Medal, World War II. Sam re-enlisted into the US Navy Reserve (Seabees) and served from August 4, 1952 to August 3, 1956 receiving an honorable discharge. Sam's passion was his large Italian family. He combined his second passion: growing avocados on his beautiful five acre property in Temecula with his first by frequently inviting all of his family and friends to gather at his home for celebrations of every birthday, special occasion and holiday. Sam had carved out a successful 36 year career as Superintendent of Los Angeles Street Lighting and retired at the young age of 57. He bought his first five acres of bountiful land in Temecula in 1985 and dedicated himself to nurturing 500 avocado trees and various citrus fruits to keep him busy during retirement. Sam also loved to hunt, fish, camp and tinker with all things an electrician finds interesting. He was an active member in the Elks Club, Holy Name Society, and Knights of Columbus during the 1960's, 1970's and early 1980’s.

The family of Sam James Cabibbo created this Life Tributes page to make it easy to share your memories.

Sam James Cabibbo was blessed with a full life to the age of...

Send flowers to the Cabibbo family.