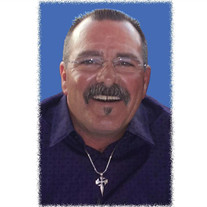 Roy Anthony "Tony" Miller, age 61, of Perris, California, passed away Tuesday, December 14, 2021, surrounded by family. Tony was born on January 26, 1960, at March Air Force Base, Riverside, California. Tony was a Journeyman Electrician. He worked for the City of Riverside for 15 years and he was a member of IBEW Local 440 for 21 years. He lived and worked in the Bay Area for the last 10 years. While in the Bay Area, he worked out of several IBEW locals on many projects including the Apple Project, the BART, and numerous medical buildings. On the job site, Tony was the go-to person if something needed corrected, developed, or redesigned. He learned these skills working alongside his father since childhood. Tony was an electrical and mechanical expert and could MacGyver anything. Tony graduated from Arlington High School in Riverside, California, and attended Riverside City College. He earned many certificates throughout his career as a Journeyman Electrician. Tony loved spending time with family and was always looking for a special place to treat family and friends to dinner. Tony's interests included flying drones, helicopters, and kites. Tony loved sailing and being on the ocean; so much so he lived on a lagoon in Foster City, California. He loved plants, flowers, and nature. Tony liked to cook and bake especially where he got to use recipes passed down from his grandmothers. He often used the old-fashion hand-crank ice-cream maker to make homemade ice cream regardless of the weather. A cousin best described Tony as always being excited about everything. Tony is survived by his wife, Xiaoni' "Sunny" Bu, parents Ray and Peggy (Potter) Miller, daughter Jacqueline Miller, sister Kristine Moore (John), the mother of his daughter Billie Smith, nephews and great-nephews, and many cousins. He was preceded in death by his grandparents Andrew and Eliza (Johnson) Potter, Roy and Rachel (Simmons) Miller, and Raymond Morehead. Memorial contributions may be made in Roy's name to Sandals Church Woodcrest Campus or to Samaritan's Purse. Fond memories and expressions of sympathy may be made at Miller-Jones, Menifee, California.

The family of Roy Anthony Miller created this Life Tributes page to make it easy to share your memories.

Send flowers to the Miller family.