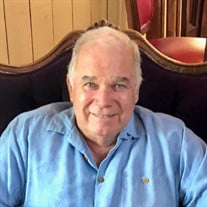 Remembrance of Ronald Lee Bean February 10, 1949 - April 5, 2021 Ronald Lee Bean passed away unexpectedly at home April 5, 2021, from heart failure due to complications of COPD. He is survived by his wife Teri Lynn (Gingerelli) Bean; daughters Becki Leigh Cardenas and Joy Lynn (Rob) Aho; grandchildren Evan and Nykky Cardenas, and Jacob and Lauren Aho; sisters Mary Thomas and Patty Alston; and brother Dale Bean. He also is survived by his many nieces and nephews whom he was especially fond of. As a young man Ron attended Arizona State University before he was drafted June, 1969, for military duty. He spent two years in the U.S. Army, proudly serving in the 3rd Regiment, traditionally known as The Old Guard, the Army’s oldest active-duty infantry unit, formed in 1784. As a member of The Old Guard Ron and his comrades proudly escorted military funerals at Arlington National Cemetery. Ron loved his country and was honorably discharged from the military June 17, 1971. Three years later he and Teri became engaged, marrying on August 17, 1974, starting their life together in Southern California where Ron worked for Orloff Meat Co. (1974-1986) and Roto Rooter (1986-1996). He was most proud of his own plumbing company, Jets West, that he and Teri formed in 1996 in Garden Grove, CA. After 20 years in business they closed Jets West, to retire and resettle in Murrieta, CA. Throughout their 46 years of marriage Ron and Teri especially enjoyed sharing sunsets along their favorite stretches of California’s beaches. Ron’s favorite viewing spot was Heisler Park in Laguna Beach, where, atop the bluffs overlooking the Pacific Ocean, the couple enjoyed tranquil sunsets together. His favorite personal hobby was spent working out in his home gym, something Ron enjoyed doing throughout his adult life. Ron and Teri experienced numerous other memories, too, and to share them with others the Bean family invites friends and family to save the date for a Celebration of Life, tentatively planned this summer (pending COVID 19 restrictions). Additional information regarding Ron’s Celebration of Life will be posted on this website at a later date.

The family of Ronald Lee Bean created this Life Tributes page to make it easy to share your memories.

Send flowers to the Bean family.