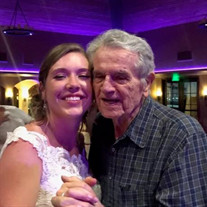 On Monday morning, April 26th, 2021 Robert Joseph Weschler passed peacefully from this life at the age of 91. Bob was born on June 24, 1929, to Joseph Emmanuel Weschler and Marie Gertrude (Strucker) Weschler, in Erie, PA. After graduating from high school, Bob went to work for the General Electric Company until he was drafted into the US Army. He served in Korea for 2 years and was honorably discharged. He returned to his hometown and married Mary Ann Boetger on May 1st, 1954. In 1960, Bob and Mary Ann, along with their two young daughters moved to California, where their youngest child Joe was born. Bob worked as a formica fabricator making countertops for over 30 years before retiring to Hemet, CA. Bob worked hard all his life, but was never too tired to help anyone in need. Once, in the middle of a major blizzard, Bob put the snow tires on his car and delivered milk to family and friends with small children. He was the neighbor who helped pour the concrete, or fix the sprinklers. He was the dad who built several lecterns for the high school, and was always willing to drive the kids to the football games, and helped out on Scouting campouts. He was the neighbor who let the teenager sleep on the couch when he missed curfew and his mom locked him out. Bob had a heart for the poor and was a champion for the underdog. He always volunteered in some capacity at his local parish, and after his retirement, helped to run the bingo program at Our Lady of the Valley for over 20 years. Bob was truly a man of honor and never shirked his responsibilities. When, in her later years, Mary Ann’s sight and health failed, Bob cared for her to the end. Bob was an avid fisherman and was fortunate enough to take several “once in a lifetime” trips. He enjoyed poker games with his son-in-law, and loved the craps tables in Laughlin. After one marathon night of play, Bob earned the nickname “Bones.” Bob is survived by his three children, Debbie (Terry) Mammen, Eileen Kunkel, and Joe (Deirdre) Weschler, and 9 grandchildren, and several nieces and nephews. He was preceded in death by his wife, Mary Ann, and his two sisters, Helen and Eileen. A viewing will be take place from 2:00 p.m. until 6:00 p.m. on Sunday May 23, 2021, with a rosary at 5:00 p.m., at Miller-Jones Mortuary, located at 1501 W Florida Ave., Hemet. A funeral mass will be held at Our Lady of the Valley Catholic Church on Monday, May 24, 2021 at 10:30 a.m., located at 780 S. State St., Hemet. Interment will follow at Riverside National Cemetery, Riverside, CA. Online condolences may be made to the family at www.miller-jones.com

On Monday morning, April 26th, 2021 Robert Joseph Weschler passed peacefully from this life at the age of 91. Bob was born on June 24, 1929, to Joseph Emmanuel Weschler and Marie Gertrude (Strucker) Weschler, in Erie, PA. After graduating... View Obituary & Service Information

The family of Robert Joseph Weschler created this Life Tributes page to make it easy to share your memories.

Send flowers to the Weschler family.