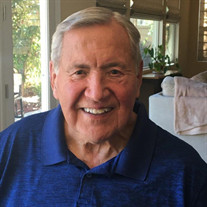 Richard William Duquette, of Murrieta, CA passed away on Monday, August 23rd at Village Walk Apartments. Richard was born in Nashua, NH, on September 18, 1943, to Paul and Augusta (Neville) Duquette. He enjoyed an idyllic childhood in Nashua. In high school he excelled in track & field, he was a state champion at throwing the discus. He played for the Nashua Panthers football team with his older brother Paul; and remained friends with his teammates for the remainder of his life. After high school Richard earned a degree in engineering from Lowell Technical Institute which later became University of Massachusetts Lowell. He cultivated a very successful career as a Sales Executive in the Semiconductor segment of the IT industry. Richard married the love of his life, Mona Claire Desjardins on April 22, 1967, in Nashua. They went on to raise three children in a home they built on Pine Acres Road in Amherst, NH, where they lived happily for over thirty years. While health challenges afflicted them both over this time frame, they shared an uncanny ability to find joy and laughter in every day. This was their legacy; to take care of each other as well as their children and grandchildren with love, empathy, and an unfailing sense of humor. They both showed tremendous compassion for each other as well as their extended family, neighbors, and friends. Richard and Mona relocated to sunny Southern California in 2008 to be closer to their children and grandchildren. After Mona’s death in 2010, Richard spent time in both CA and NH. He had been in CA for the past four years where he enjoyed quality time with his children and grandchildren, playing bridge, cards with friends, attending water aerobics classes and swimming as frequently as possible. Richard is survived by his brother Paul Duquette and sister Sharlene Parker; his three children and their spouses; John Duquette, Jacqueline & Barry Day and James & Chrystaunia Duquette; as well as his grandchildren; Patrick Duquette, Riley Day, Matthew Duquette, Grace Duquette and Jocelyn Day. He is also survived by several cousins, nieces, and nephews. A private funeral will be held at a future date. The Duquette Family would like to thank friends and family for their kindness and support during this time. In lieu of flowers, the family requests a contribution to either the American Red Cross (redcross.org) or the charity of your choosing.

The family of Richard William Duquette created this Life Tributes page to make it easy to share your memories.

Richard William Duquette, of Murrieta, CA passed away on Monday,...

Send flowers to the Duquette family.