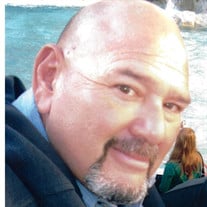 Rafael (Ralph) Salvador Montoya was a kind and gentle soul whose endless and unconditional giving, deep love of family and friends, and spirit of warmth and joy made him dearly beloved by all who knew him. Ralph was born on February 1, 1958 in La Jolla, California, to Roberto and Julia Montoya. He grew up in Oceanside with his two older sisters, Elena Spear and Lollyn Burns. As a boy, he loved spending time with his tios (uncles) and padrino (godfather), who often took him hunting and horseback riding. When Ralph was eleven, he moved to Hemet, where he spent the rest of his life. He attended Hemet High, graduating in 1976. Built like a mountain, Ralph joined the wrestling team at Hemet High and played football as well, as an offensive lineman. After high school, Ralph attended MSJC, where he continued to play football. After college, Ralph started a long career in the Hemet Unified School District. He coached wrestling at Hemet High for nearly twenty years, and also coached football at Dartmouth Middle School. As a wrestling coach, Ralph was always matched up against the heavyweights in practice. He coached hundreds of kids, who warmly remember his positive impact and guidance. After coaching, Ralph worked up until his retirement in the Facilities Department for the School District. He was a mainstay of the Hemet school community. In 1984, Ralph was blessed with his son, Jacob, whom he raised. As a young boy, Jacob would tag along with his father at wrestling practices, where the cheerleaders would watch him while Ralph coached. Jacob acquired Ralph’s sweet disposition and was the source of his father’s immense love and pride. Ralph was introduced to the love of his life, then Marcia Covey, at a Christmas party in 1992. Although a friend had tried to set them up, a miscommunication led to Ralph flirting the whole evening with the wrong Covey girl, one of Marcia’s sisters. Undeterred, Marcia spotted him a month later at a country western bar and threw a wet napkin at him as he danced nearby. It got his attention, and he never looked back. It was the nicest thing she would ever throw at him. Ralph and Marcia got married on June 28, 1996, at Ramona Bowl in Hemet. Marcia recalls of their years together that no matter where they went, somebody always knew him. Bald before bald was cool, Ralph was instantly recognizable. More than that, he was universally loved and had lasting friendships: once a friend, you were a friend for life, and he would always help you. After their marriage, Ralph and Jacob joined their family with Marcia and her four sons, Damon, Aaron, Tyler, and Cameron. He also became part of the larger “Covey Clan,” consisting of Marcia’s seven siblings, and a multitude of nephews, nieces and cousins. Ralph was immediately a pillar of the family, with its forty-person Thanksgiving and Christmas dinners and twenty-five years of cherished Covey Family vacations. Ralph was known by all for his constant and unconditional giving. Whether volunteering to drive to the airport or helping a friend with a repair, he was always being of service, without anyone asking or the slightest hesitation or resentment. It was who he was. In our family, he was “Saint Ralphie,” and we would ask ourselves “What Would Ralphie Do” when needing inspiration to do the right thing, which came so naturally to him. Ralph loved family more than anything, especially his grandchildren and the many young nephews and nieces he watched grow. He never missed one of his grandchildren’s sporting events and was always their biggest (and loudest) cheerleader. He traveled across the country for all the high school and college graduations. He dressed up as Santa each year for the latest generation of cousins. He taught them how to drive. He lived for it and was always looking forward to the next family get-together. Ralph retired in June 2021, shortly after Marcia, and the two were just embarking on their adventure of this next phase of their life. Tragically, Ralph contracted Covid-19, even though he was vaccinated, and it took his life the evening of September 10, 2021. Ralph was universally loved and immensely enriched the lives of all who knew him. Although his loss is devastating, his family, friends and colleagues will forever cherish the amazing blessing and gift of his life, love and friendship. He leaves behind a rich legacy, as an irreplaceable family member and friend. Ralph is survived by his loving wife, Marcia, his son, Jacob, and stepsons Damon, Aaron, Tyler, and Cameron, his grandchildren, Jordynn, Marley, Jackson, Madison, Talon, and Torin, his sisters, and his loving in-laws. A memorial celebrating his life will take place at the Ramona Bowl on Saturday, October 2, 2021, at 5:00 p.m. All are welcome. In lieu of flowers, donations can be made in Ralph Montoya’s name to the Hemet Sportsman’s Club, which provides financial assistance to area sports teams, including college scholarships. Family requests attendees to wear HHS apparel or bright colors. NO BLACK, please.

Rafael (Ralph) Salvador Montoya was a kind and gentle soul whose endless and unconditional giving, deep love of family and friends, and spirit of warmth and joy made him dearly beloved by all who knew him. Ralph was born on February 1, 1958... View Obituary & Service Information

The family of Ralph (Rafael) Salvador Montoya created this Life Tributes page to make it easy to share your memories.

Rafael (Ralph) Salvador Montoya was a kind and gentle soul whose...

Send flowers to the Montoya family.