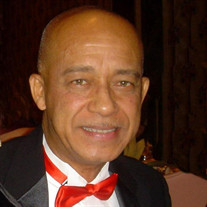 Rafael “Ray” Montañez of Moreno Valley, CA departed this life on Wednesday, January 19, 2022 at his home. He was born on March 9, 1948 to Rafael Montañez and Juana Estrella in Santurce, Puerto Rico. From that union Rafael was the oldest of four boys. When he was a young child, he relocated to Bronx, NY. He was educated in the New York Public School System. In 1966 he enlisted in the United States Marine Corps. During his military career he served tours of duty in SC, Vietnam, New York, Japan, Washington, DC, VA, CA, and Germany. Upon his return to CONUS in 1987, he returned to El Toro MC Base, CA, from which he retired in 1988, after 22 years of exemplary service in the USMC. After retiring from the USMC, Ray served as a Service Officer of Disabled American Veterans, Department of CA, first as a Department Service Officer, and later promoted to National Service Officer. He also served as a National Service Officer with Paralyzed Veterans of America before retiring in 2004. After retirement Ray continued to serve his country as a volunteer, assisting veterans with benefit information, and assistance with filing claims. When offered gratuity for his service, Ray declined, electing to donate offered funds to the DAV. Ray was an active member in a number of organizations, including DAV Chapter 28, Riverside, CA (Volunteer Service Officer since 6/1988); The Masonic Institution, Lodge #581 (jurisdiction of GA); The National Order of Trench Rats Dugout 002, Los Angeles, CA; Donald H. Coleman Consistory # 329, Ancient and Accepted Scottish Rite of Freemasonry, Southern Jurisdiction (32º); The Veterans of Foreign Wars (VFW), and The American Legion Post 69, Washington, D.C. (Adjutant). He is survived by his loving and devoted wife of 51 years, Lillie Montañez, son, Timothy Montañez (Wita), daughter, Raishon Montañez, five grandchildren, Alex, Anthony, Adrien, Ashleigh, their mother Lynda Montañez, granddaughter Jaidyn, two bonus Grand Twins, Selena and Serena, three brothers, Monty, Jerry, and Robert, and a host of nieces, nephews, relatives and friends. He was preceded in death by his parents and his older brother, Luis Guzman. Ray was an amazing husband, outstanding father and excellent grandfather. His greatest joy was spending time with family and traveling. He was a loving and compassionate man with strong values, a giant heart, and a positive spirit. His mantra was, “You have to try”. He left his footprint in many hearts. He will be remembered for his true love for family and friends, and his passion for service to his country and those who served. He carried himself in a way that commanded respect. In his spare time, he loved listening to Salsa and Jazz, writing, photography, and videography. Ray exemplified the U.S. Marine Corps motto, Semper Fidelis, (“Always Faithful”). He dedicated his life to military service to his country, and afterwards in volunteer service to help others. He remained a public servant even in retirement. Physically he’s gone, spiritually he will be in our hearts forever. As a dear friend so eloquently stated, “Big Papi is going into the hall of fame, Little Papi is going to heaven”. Semper Fidelis.

Rafael &#8220;Ray&#8221; Montañez of Moreno Valley, CA departed this life on Wednesday, January 19, 2022 at his home. He was born on March 9, 1948 to Rafael Montañez and Juana Estrella in Santurce, Puerto Rico. From that union Rafael was the... View Obituary & Service Information

The family of Rafael Montañez created this Life Tributes page to make it easy to share your memories.

Send flowers to the Montañez family.