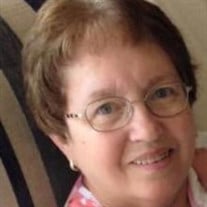 Rachel Edmundson Kolasz, 76, passed away on Saturday, June 26, 2021, in Menifee, California. She was born on Monday, April 9, 1945 in McKeesport, Pennsylvania, to her parents, Howard and Helen Edmundson. Rachel was born at the end of WWII and was an only child for five years until her only sibling, Kathy, was born. Rachel was an amazing big sister. When Rachel was 14 years old, her father, Howard, passed away. A year later the family moved to California. Rachel's mother, Helen, later married Clinton Scott who was a wonderful stepfather to Rachel and her sister. Rachel graduated from Glendora High School and attended one year of college. Rachel then married and as a result of that union her two beloved children were born, April and David Niccum. While being the dedicated mother, Rachel worked for Sears for most of her career. It was while working in the home improvement and plumbing office that she met the love of her life. Rachel and John Edwin Kolasz got married on June 27, 1992. Together, they raised their blended family. Rachel was a very active member of the First Presbyterian Church, in Hemet, California. Rachel participated every year in the annual Fall Sale event at the church and was in charge of the jewelry sales. In her spare time, Rachel loved to go shopping, especially for purses and shoes. She also enjoyed cooking and baking for her family. She volunteered for the travel club in her community. In addition, along with a core group of friends, Rachel and John were avid cruise goers and had been on over 30 cruises together. Rachel was a very kind woman who had a beautiful soul. She would help anyone she could and never had a bad thing to say about anyone. Rachel will be greatly missed by her family and friends. She was preceded in death by her parents, Howard and Helen Edmundson, and her stepfather, Clinton Scott. Rachel is survived by her husband, John Kolasz, her children, April (Richard) Dodder and David (Deanna) Niccum, her stepchildren, Melissa (Tim) Heath, Melanie Kolasz, and Michael (Bernadette) Kolasz, her sister, Kathleen Edmundson, her grandchildren, Scott Hutchison, Drew Niccum, Catie Heath, Alicia Kolasz, Samantha Kolasz, Bernadette Kolasz, Michael Kolasz Jr., Katherine Kolasz, and Hannah Kolasz, her nephew, Brenton(Jennifer) Smith, her niece, Katie (Jon French) Smith, three great grandchildren and great nephew Joseph French.

Rachel Edmundson Kolasz, 76, passed away on Saturday, June 26, 2021, in Menifee, California. She was born on Monday, April 9, 1945 in McKeesport, Pennsylvania, to her parents, Howard and Helen Edmundson. Rachel was born at the end of WWII and... View Obituary & Service Information

The family of Rachel Edmundson Kolasz created this Life Tributes page to make it easy to share your memories.

Send flowers to the Kolasz family.