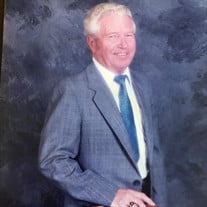 In loving memory of Patrick J. Daly, who entered into this life on July 6th, 1937 in Glasgow Scotland, and entered into eternal life on February 17th, 2022, in Menifee California. Beloved Husband of Rosaleen Daly Father of Patrick F. (Kim) Daly and of Michael A. (Melinda) Daly Blessed Grandfather of Melanie, Patrick S. and Vanessa Great grandfather of Sean, Samuel, and Silas Patrick was born to his proud parents, Patrick and Catherine Daly, and was the younger brother of siblings, Rosina and Thomas, who have all preceded him in death. Patrick married his sweetheart, Rosaleen, in 1960 at Our Lady & St. George Catholic Church, in Glasgow Scotland. Patrick soon became the proud dad of his two young sons, Patrick and Michael. While raising his young family, he made the brave, and wise decision, to move his family to, Redondo Beach, California, in search of a brighter future for all. Patrick spent most of his career in the USA, working in the aerospace industry. He did so until he retired early at the age of fifty nine. By that time he was the proud grandfather of three children all aged five and under. He was instrumental in their day to day lives. He loved that he could be there for them every day. To teach them, to transport them, to tease them, to care for them, but most importantly just to love them. Just as he loved his grandchildren, he had the privilege of getting to know and to love his three young great grandsons, who coincidentally, are all aged five and under too. As was common with Patrick's generation, he learned to play the guitar. play the piano, and to sing, primarily for the enjoyment of his family and friends. It was with many of these same friends and family members, and loving wife, that he would spend time at dances and parties, and on vacations and on cruises to fun filled, faraway places. He loved his family and friends and they loved him in return. The other great love of Patrick's life was Glasgow Celtic Football Club. He was a life long fan and supporter and travelled near and far to watch his team play the beautiful game of football. He was a true gentleman in every sense of the word. He will be incredibly missed by all of us, that were fortunate enough to have had him in our lives, for even some small pocket of time, in his amazing eighty four years of a life well lived.

In loving memory of Patrick J. Daly, who entered into this life on July 6th, 1937 in Glasgow Scotland, and entered into eternal life on February 17th, 2022, in Menifee California. Beloved Husband of Rosaleen Daly Father of Patrick F. (Kim)... View Obituary & Service Information

The family of Patrick John Daly created this Life Tributes page to make it easy to share your memories.

In loving memory of Patrick J. Daly, who entered into this life...

Send flowers to the Daly family.