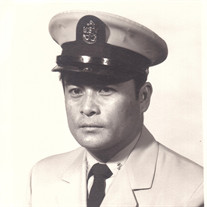 Born on July 29, 1929 in Santiago, Ilocos Sur, Orlino Rayray Elefante was the third of seven children and the second of three brothers who enlisted in the US Navy. As a young sailor, in Hawaii, Orlino handled his duties with exemplary ease. He was a very organized individual, adept at writing with both hands at the same time, which attested to his success as he was featured in the local naval paper with the heading “Ambidextrous Storekeeper Works to Best Advantage”. The handsome, eligible bachelor Orlino married the demure, beautiful Soledad Saldevar, in 1958, an arrangement between their parents to bring the families closer as Orlino’s father attempted to restore his maternal roots in Sta. Lucia, Ilocos Sur. As Orlino had to return to his duty station in Hawaii at the time, his bride, Soledad, would soon follow in 1960 and join him. After a successful career of 20 years in the Navy, Orlino retired, but continued to work as a Materials Handler for the Defense Logistics Agency for 20 more years. The second retirement provided the couple the opportunity to travel between Ilocos Sur and California. They would attend social events and become members of the Santiago Club of San Diego and Santa Lucians, International. Orlino once served as President of the Santiago Club. Orlino loved to garden, take and be in pictures and walk. In the summer, their backyard would be full of radish flowers that would bud and provide plentiful salads. In the winter, snow peas would abound. When taking pictures, his favorite model, of course, was Soledad. When his picture was taken, he would strike a debonair pose. He would walk two miles daily. Unfortunately, his last walk was the symptom of an unsuspecting illness that surprised us all of its finality. Orlino is survived by Soledad, his wife of 64 years, two sisters, Emerenciana and Cecilia, and numerous nieces and nephews.

Born on July 29, 1929 in Santiago, Ilocos Sur, Orlino Rayray Elefante was the third of seven children and the second of three brothers who enlisted in the US Navy. As a young sailor, in Hawaii, Orlino handled his duties with exemplary ease.... View Obituary & Service Information

The family of Orlino Rayray Elefante created this Life Tributes page to make it easy to share your memories.

Send flowers to the Elefante family.