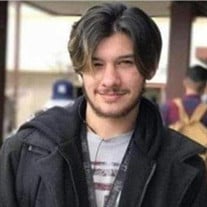 Noah Granado, born March 3rd, 2000, was a boy turned young man that the world over would have cherished, and those who knew him would know this to be true. He dedicated his life, though not always obvious at times, to helping others and pursuing passions such as writing music, building cars, and carpentry work. He was one who felt anything he needed could be built by his own two hands, and anytime one might have needed something, he would ensure he was there to lend a hand in any way appropriate. Following his brother, Chance Granado’s enlistment in the United States Navy, he said his final farewell with the warmest hug and sincerity in his tearful eyes. Motivated to follow this move, he devoted his life to service, not just within his personal and professional lives, but to his country as well when he enlisted in the United States Army August 8th, 2017. Noah served his country, his family, his friends, and loyal girlfriend with honor and love. Exiting active service and continuing reserve service as an Army Mechanic, Noah applied his intellect and steadfast dedication to writing music, purchasing what he and his brother believed to be the holy grail of guitars, a Gretsch Electromatic in gold and white. Though it was not the coveted White Falcon that they had sought, Noah made the best possible use of it in the beauty he created with his own two hands and a mind undeterred by mortal limitations. By age 21, Noah was on his way to earning various certifications and licenses in the Cybersecurity field, including Sec+, and had a job that he looked forward to every single day, building superchargers for Edelbrock. This was another one of his passions, building power from the ground up for muscle cars. Finally, Noah was a computer guru, building his own super PC, once more with his own two hands. Between strumming a 63’ Telecaster Custom gifted as his first guitar from his brother, building unique muscle cars in his driveway, and massacring unsuspecting foes with his PC, Noah was beyond gifted and talented in everything he did. He did all of this while still maintaining his driving force, helping and being there for others. July 4th, 2021, he is officially declared to have left this world, knowing in his final moments that he was loved, cherished, and forever remembered by his mother Alison, stepfather Luis, older sister Rheanna, younger brother Nathan, girlfriend Elizabeth, and his oldest brother in blood and arms, and one of his best friends, Chance. For those who did not have the blessing to know Noah, just know that he was a man of many talents as well as a stud who knew how to dress and could beat anyone on the ¼ mile as well as in the cyber realm. His riffs will be heard from the Aether and his love for his family and friends will be felt eternally. REST IN PEACE: BROTHER, SON, FRIEND, SOLDIER NOAH DAVID GRANADO: 03 MARCH 2000 – 04 JULY 2021

Noah Granado, born March 3rd, 2000, was a boy turned young man that the world over would have cherished, and those who knew him would know this to be true. He dedicated his life, though not always obvious at times, to helping others and pursuing... View Obituary & Service Information

The family of Noah David Granado created this Life Tributes page to make it easy to share your memories.

Send flowers to the Granado family.