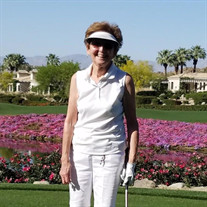 Nancy Norma (Haldiman) Davidson was the youngest of four children and was born on July 29, 1931, to Elsie and Walter Haldiman in Monroe, WI. Her parents emigrated from Switzerland and were dairy farmers and though she loved her family very much, she determined early on farming life was not for her. Nancy met Bob (who was dating her roommate) in Madison, WI and that was it. They married and headed off to CA to start their new life. They adored CA, learning how to golf, enjoying the good weather, playing bridge and raising three children Steve, Patti and Tom mostly in Anaheim, CA. After years of volunteering as a Teacher’s Aid at the kids’ school, the principal mentioned Nancy could be paid for this work. She applied that very same day and was hired and enjoyed her work immensely for many years. As a first generation American, Nancy was proud of her country. In 1976, the year of the Bicentennial, it is rumored she wore red, white and blue every day. Nancy was also proud of her Swiss heritage, traveling there, visiting family and keeping traditions alive at home like yodeling, doing the polka and making bratziliis (a Swiss cookie). After the kids were raised and gone, Nancy and Bob moved to The Colony in Murrieta. Nancy’s golf game really took off. Not only was she the first person in the family to have a hole-in-one but then she had a second, much to the chagrin of Bob and Tom. Marital bliss resumed when Bob finally got one. Nancy held several different offices in The Colony Women’s Golf Club. Nancy and Bob enjoyed playing in the Jack and Jill golf events and placed 1st twenty times over the years. The winning photos are proudly displayed in the garage with the last victory occurring just four months ago. She enjoyed meeting new friends and settled into her life that included in addition to golfing, daily walks, aerobic classes, supporting Bob in his paddle tennis events and racing to Honeycutt’s for breakfast after church services at Saint Martha’s. Nancy Davidson passed away suddenly, age 89, on May 20th, 2021. Heaven’s population has been increased by one while Earth is minus a Saint who will be dearly missed. All whom she loved dearly will remember her for her ready smile and laugh, quick wit, competitiveness in any game, beautiful singing voice, tea ring making abilities, devotion to the daily crossword puzzle, appreciation of jelly doughnuts and extraordinary love for her family. To sum it all up, as Bob said, “she was quite a gal”. Nancy will be sorely missed and forever in our hearts. She is survived by her devoted husband Bob Davidson, children Steve Davidson (Debbie), Patti Davidson Coyle (Frank), and Tom Davidson (Halle), and eight much adored grandchildren. Family and friends are welcomed to attend Nancy’s funeral mass at St. Martha's Catholic Church in Murrieta, CA on 6/21 starting at 10:55AM with a eulogy. Memorial contributions may be made to Memorial Sloan Kettering Cancer Center at www.mskcc.org.

Nancy Norma (Haldiman) Davidson was the youngest of four children and was born on July 29, 1931, to Elsie and Walter Haldiman in Monroe, WI. Her parents emigrated from Switzerland and were dairy farmers and though she loved her family very... View Obituary & Service Information

The family of Nancy Norma Davidson created this Life Tributes page to make it easy to share your memories.

Nancy Norma (Haldiman) Davidson was the youngest of four children...

Send flowers to the Davidson family.