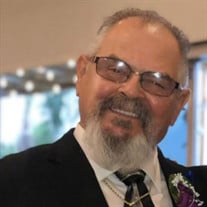 Michael Steven Ayala of Moreno Valley, California passed away on May 26, 2022 after a tough battle with cholangiocarcinoma cancer and diabetes which have been attributed to Agent Orange. He passed peacefully surrounded by his family. He was born September 15, 1948, and was adopted by his loving parents Sabino and Maria Ayala. He grew up in Orange County, California and was a proud Vietnam Veteran that served 1969 to 1971. His unit was Army Headquarters Area Command. Michael worked as a dispatcher that included answering and screening emergency and non-emergency calls, dispatching where to deliver medical supplies, and even the delivery of explosives. He received the following medals: National defense service medal, Vietnam service medal, Vietnam campaign medal, army commendation medal and bronze star medal. In 1988, he met the love of his life Christine; it was love at first sight. They were married for 34 years. He worked as a truck driver for over 40 years, first with Carl Karcher Enterprises and then Stater Brothers. Michael Ayala is survived by his wife Christine, their six daughters Angela, Anne, Alicia, Stephanie, Melissa, Michelle, his twelve grandchildren Alexis, Michael, Jordan, Raquel, Rudy, Andrew, Bailey, RJ, Rianna, Mia, Mason, lil Mike, his sister Rebecca, his loyal companion Max, and numerous nieces and nephews. Michael was patient, loving, kind with a generous heart of gold, never hesitating to help people out. He was known for his infectious smile, positivity, and love for music. He would often whistle his favorite songs, which in turn brought joy to those around him. He will be deeply missed.

Michael Steven Ayala of Moreno Valley, California passed away on May 26, 2022 after a tough battle with cholangiocarcinoma cancer and diabetes which have been attributed to Agent Orange. He passed peacefully surrounded by his family. He was... View Obituary & Service Information

The family of Michael Steven Ayala created this Life Tributes page to make it easy to share your memories.

Send flowers to the Ayala family.