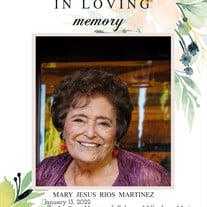 Mary Jesus Rios Martinez Mary Jesus Vasquez was born on Nov 16, 1928 to Juan and Dolores Vasquez. She was the second youngest of 8 children. Attended Catholic Elementary Schools, through 8th grade Married Antonio Luis Rios on July 12, 1947 Children: Antonio Luis Rios, Jr 04/26/1948 Rachael Rios Dillberg 08/14/1950 Rosemarie Vasquez Ramos 01/29/1960; raised by her Aunt, Mary Rios. In 1960, Rosemarie was born to Gilbert and Adrienne Vasquez who passed during childbirth. Rosemarie was raised by her Aunt, Mary Rios, alongside her cousins Tony and Rachael. Mary returned to school in 1968, received her high school diploma and started college classes at East Los Angeles College. Mary transferred to Cal State Los Angeles and continued working towards her degree in Education. 1974 Antonio Luis Rios Senior passed away. Mary was a widow at the age of 45. Mary completed her Bachelor’s Degree in Elementary Education and obtained her Teaching Credential in 1974. Mary was hired by LAUSD as a Kindergarten Teacher and assigned to Evergreen Ave Elementary. She worked in this role for 20 years. During the years of 1974 and 1984, Mary kept herself busy by working, jogging, crafting, and her most favorite activity, spending time with her grandkids. Her first four grandsons definitely kept her busy! They enjoyed many weekends and summer days with G’Ma but the most memorable was when Mary took her four grandsons to Hawaii. It was a trip of a lifetime and one filled with cherished memories that younger generations would hear about for years to come! In 1984 Mary met and married John Martinez. It was a whirlwind romance! Mary retired in 1994 so that she and John could enjoy time at their vacation home in Rosarito Beach. They also spent time traveling across the USA visiting John’s Army buddies. By this time in Mary’s life, a whole new batch of grandbabies began to arrive! When not traveling with John, she was busy spending time with her grandchildren AND great-grandchildren! Her life was filled with Love and Blessings. In 1996 Mary and John purchased their beautiful Menifee home. They loved living in a small rural community close to their children Tony and Rosemarie. They fit right in with the close-knit group of neighbors and John’s barn soon became the “Man Cave” for Friday afternoon beers. It wasn’t long before their home also became the hub for many family gatherings. Easter Sunday Brunch, Christmas Eve, and “G’Ma Mary’s Annual Tamale Fest” are probably the most memorable gatherings. John and Mary continued traveling to Baja and visiting friends across the Midwest. They also continued to make their home and property more beautiful. It was their pride and joy. Oh yes, and more grandkids arrived too! In 2005 John Martinez passed and Mary was left to begin a new chapter of her life. She turned her focus back to crafting with her daughters and getting involved in the community. She joined a local gym and became a member of the Rosary Makers at St. Martha’s Church. Friendships built at these groups blossomed into a large circle of friends. Her days were certainly busy! Spending time with her children, grandchildren, great-grandchildren, gym, church activities, family and friends filled her life. So much so, that if you wanted to see her, you had to call and make an appointment! Blessings, for sure! Mary Jesus Rios Martinez was a force, magnetic in a way that drew not only her family to her but people from all walks of life, all ages. Sit down with Mary, have a drink, and you might get lucky enough to hear one of her famous dirty jokes. Go over to Mary’s and you might end up in a karaoke duet while her dogs drop lemons at your feet. Visit with Mary and maybe she’ll teach you how to capture a bouquet of flowers in watercolor. Mary will be remembered through these stories, these beloved memories, by her children, grandchildren, great-grandchildren, and great-greatgrandchildren, and the entire community she created.

The family of Mary Jesus Rios Martinez created this Life Tributes page to make it easy to share your memories.