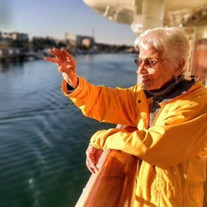 Mary Leona "Lee" Kozma passed away on April 30, 2022 at the age of 101, at her home in Murrieta, California. Lee was born July 27, 1920 to Napoleon and Hilda Rivord Vadnais in Marquette, Michigan. Her childhood ambition was to be a teacher, and she graduated from Northern Michigan University in 1943 with degrees in Education and Art. She then moved to Belleville, Michigan for a teaching position, where she met fellow teacher Steve Kozma. They married in 1945 and lived in Belleville for the next forty-two years. Lee taught elementary school in Belleville for many years, then administered a reading education program before retiring in 1980. She and Steve retired to Florida during the winter months, but returned to Michigan in summer. After Steve's death in 1992, Lee continued living in Florida until moving to California in 2003. In her late seventies, Lee suffered a stroke that paralyzed her left side. Despite this setback, she maintained a positive attitude and refused to let it slow her down. Her determination and resilience in facing adversity was a constant inspiration to all who knew her. Lee's passion for art continued throughout her life. Painting in oils and acrylics was her mainstay, but she explored other forms as well, including wood carving and crafting jewelry from polished rocks collected on Lake Michigan beaches. She painted almost daily up until the last few weeks of her life. After retiring, she volunteered as an art teacher at senior centers. At her home in Murrieta, she loved taking visitors on a tour of her "art room" and showing off her latest creations. She expressed her artistic nature in other ways too, including her fashionable wardrobe and accessories. Lee also enjoyed dancing, reading, writing stories and poetry, and was a fierce competitor at card games and Scrabble. She especially loved spending time with her family and socializing with her "peers." During these times, she would often repeat favorite stories of significant events in her life. Lee had a keen interest in politics and proudly supported the Democratic party. A devout Catholic, her strong faith sustained her at all times. She generously contributed to causes and charities that touched her heart. In her later years, she determinedly attempted to keep up with computer technology, with varying degrees of success and sometimes comical consequences. No matter what it was, Lee always wanted to be doing something to keep active and live life to the fullest. When she reached her nineties, her goal was to live to 100 and take her family on a cruise to celebrate. Although her health and the pandemic did not permit that, there was a small gathering of family and friends to commemorate the milestone. On the morning of her 100th birthday, she woke up and announced, "I made it!" Lee is survived by her son Tom (Ann) Kozma, daughter Gaeney (Perry) Willmore, and son David Kozma; granddaughter Whitney Heberle, grandson Gregory Kozma, and granddaughter Natalie Kozma; and four great-grandchildren: Brayden, Weston, Owen, and Jameson Dunn. She was preceded in death by her parents, husband, and siblings Francis "Bud" Vadnais, William Vadnais, and Dorothy Proulx. Lee will be dearly missed, but the legacy of her wonderful spirit will always remain in our hearts. A funeral mass will be held on June 7, 2022 at 10:00AM at St. Francis of Rome, Wildomar, California. Lee's final resting place will be at Michigan Memorial Park Cemetery in Flat Rock, Michigan. Contributions in her memory may be made to St. Jude's Children's Research Hospital.

Mary Leona "Lee" Kozma passed away on April 30, 2022 at the age of 101, at her home in Murrieta, California. Lee was born July 27, 1920 to Napoleon and Hilda Rivord Vadnais in Marquette, Michigan. Her childhood ambition was to be a teacher,... View Obituary & Service Information

The family of Mary Leona Kozma created this Life Tributes page to make it easy to share your memories.

Send flowers to the Kozma family.