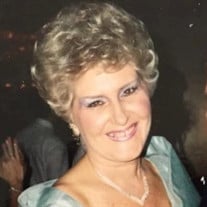 Marilyn Lutz was born in Brooklyn, N.Y. on 11/28/34 to Irene and Charles Lutz. She had two sisters, Barbara and Irene. She married Francis Sullivan in 1952 and had three children, Thomas, Kevin and Kathleen (Kate), who survive her. She was a book keeper for 20 years, working for the Catholic Church for many of those years. Although in her early years as a mom, we had very little in the way of material things as a family, mom always made us feel as if we had everything. She was a selfless person who wouldn’t hesitate to carry three sandy kids up the stairs, after those same kids had fallen asleep on her lap during the train ride back from a day at the beach, while she was recovering from a recent back surgery. After the passing of Francis in 1969, she remarried four years later. Marilyn and Enrico (Harry) Sambucini were married, until his death in 1993. She loved the frequent trips to Coney Island with Harry and the family (by then, there was a car involved) to watch the fireworks and make sure that her children rode every ride. Sometimes twice. Marilyn and Harry lived together in Staten Island, N.Y. for most of those years, before moving to Banning, CA in 1992. Marilyn was an avid lover of music, dancing and swimming. She was also a frequent designer of jewelry. She is survived by her three children Thomas, Kevin and Kate, as well as her seven grandchildren Tara, Cole, Keslie, Lauren, Kristin, Kelly and Sam. She will rest with her beloved Harry at Riverside National Cemetery. It is hoped that one day when her favorite singer, Tom Jones, joins her in heaven, he will sing her favorite song “Delilah” to her. She will then tell him what a great deal she got on the place that she and Harry are sharing in heaven. Marilyn will always be loved for the exceptional mom, grandmother, sister, daughter, and friend that she was to all who knew her.

Marilyn Lutz was born in Brooklyn, N.Y. on 11/28/34 to Irene and Charles Lutz. She had two sisters, Barbara and Irene. She married Francis Sullivan in 1952 and had three children, Thomas, Kevin and Kathleen (Kate), who survive her. She was a... View Obituary & Service Information

The family of Marilyn Irene Sambucini created this Life Tributes page to make it easy to share your memories.

Send flowers to the Sambucini family.