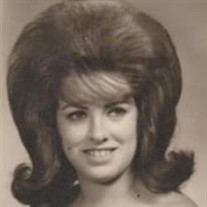 MARIE NICOLE LAMONS Marie Nicole Stanley was born to parents Albert and Germaine Stanley (Hitchcock) on May 14, 1946 in Sherbrook Quebec Canada. She lived in Sainte-Edwidge-de Clefton, Quebec until she moved to Wallacburg Ontario, Canada. She then moved to Detroit Michigain when she was 12 yrs old. In 1958 she moved to Hawthorne, CA. There in 1963 she met the love of her life, Jerry. They married in 1965 and had two children, Jerry Lamons Jr and a daughter, Karen Lamons Garrett. They raised their family in Torrance, CA and she worked at Little Company of Mary Hospital for many years. She was always a loving, loyal and supportive mom and wife. In 2017 she was unfortunately diagnosed with a progressive form of Parkinson’s called PSP. She fought very hard and even participated in a study at USC to try and beat the disease and help others diagnosed with the neurological disease. She succumbed to this disease on June 14, 2022. Her husband Jerry of 57 years cared for her until her last breath. She is preceded in death by her parents and brother Joseph. Her remaining family include her husband Jerry Lamons Sr, son Jerry Lamons Jr, daughter Karen Lamons Garrett and son-in-law Bobby Garrett. Grandchildren Danielle and Martin, and Martin’s fiancé Heather. Great grandchildren Ben, Emma, Trinity, Marylen, Ren, Mia and Jr. Her nieces and nephews Greg, Laurie, Val, Mary and Mark, as well as many other family members and friends. Marie has a secret personal request for her ashes. She was a big cat lover and she asked that in lieu of flowers that donations be made to a local cat rescue that has been very near and dear to her heart, Let Them Be Little Feline Rescue at WWW.LTBLRESCUE.ORG.

The family of Marie Nicole Lamons created this Life Tributes page to make it easy to share your memories.

Send flowers to the Lamons family.