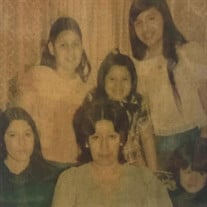 5 Generations: Memoirs of a Mother Born in Mexico. Interviewed by Ramon on 1/2021 Early Life My name is Maria, and this is my story. I was born in April 1943, in the city of Nacozari, Sonora MX. My father was born in Dolores, Chihuahua MX... View Obituary & Service Information

The family of Maria Elvia Mares created this Life Tributes page to make it easy to share your memories.

5 Generations: Memoirs of a Mother
Born in Mexico.
Interviewed...

Send flowers to the Mares family.