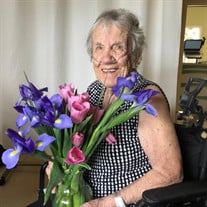 Our family is sad to announce the passing of our mother Lavina Lisanti on March 19, 2021 in Murrieta, Ca. at the age of 97 years and 7 months! Born in Livingston, Montana on June 23, 1923 to Fred & Nita Zeiner. Predeceased by her parents, Fred and Nita Zeiner and her brother Donald Zeiner. She is survived by her children; Fred his wife Judy, Charles and his wife Marilynn Lisanti and Nita Smith. She is also survived by four grandchildren, eight great grandchildren and two great great grandchildren. At a very early age she was very interested in music and it was even suggested that she should go to Julliard School of Music in New York. As with the plans of her entire generation dreams were altered by the zeitgeist of World War 2. Against the advice of her father and the general norms of society she volunteered into the Army. As with many others she wanted to serve her country. As a member of the Women’s Army Air Corp she drove a 2 ½ ton personnel trucks as well as Jeeps delivering VIPs visitors on Base. One such VIP was Harry James the famous band leader. She was very attractive and young so the Army began to photograph her for enlistment posters. Often in these posters to the chagrin of her superiors she would appear out of uniform wearing civilian tennis shoes. The posters were published anyway. That’s our mom! During the early part of the war she was married to a young sailor named Charles Lisanti and later had two boys. They lived in Naval housing until the end of the war. Years later divorcing she moved North to be near her brother in Salem, Oregon. Over the years there she worked as an executive secretary at Memorial Hospital, the State Tax Commission and the State Mental Health Department. Lavina, known by friends and family alike as “Lee” was known to be a very hard working single mom. She would return home from her day work, change clothes and go to work as a waitress until 10pm except on weekends until 12 midnight. Eight years after her divorce she married Dean Smith and with great happiness had her daughter Nita. After a short time she was again a single parent, now with three children. At that time she moved to Southern California with Nita. She worked again as a secretary with Orange County Probation. Everywhere “Lee” worked she made lifetime friends. She was strong, resilient and was known as a person who no matter what came her way remained positive. At 88 years of age she loved to ride her three wheeled bicycle. Mom loved life. After a number of years of independent living her health mandated that she live in a skilled nursing facility. In her third year there another zeitgeist of time came. The Corona Pandemic. Locked down with no visitors except through her bedroom window. A tough yet special time. Fred sent regular donut deliveries, Judy always supplied her with new pants and blouses. Nita called her frequently and brought hope and joy to her day. Due to loss of hearing aids Marilynn and I communicated by a whiteboard and dry erase pens through the window. She had a beach umbrella and three hummingbird feeders outside her window to the envy of the other residents! She contracted the Corona Virus and was taken to the hospital twice and both times returned within hours. Ten days in isolation and she survived the virus. I told you she was strong. Later she receive both virus shots and was A ok. On Tuesday the 9th of March we took her out to lunch, got her hair trimmed and had a wonderful day planning another outing in a few days. On Friday March 12th we received a call at 9pm from the facility that she had had a stroke. The next day at the hospital it was obvious that it was severe and life threatening. After five days she was moved from the hospital back to her room at the facility. All her children and their spouses were in her room that day. On Friday the 19th other family members were able to visit her for ½ hour intervals, separately. Late on Friday night we got the call that she had passed away. Mom told me that all through her life God had been with her. She loved to read the Bible and was definitely a believer in Jesus. His life, death and resurrection. Her only concern was that heaven might be overcrowded! Her faith in the last year was inspiring. Our family would like to take the time to give our sincerest gratitude to the Doctors, Nurses, LVNs, CNAs, kitchen staff, activity directors, physical therapy dept, Social workers, maintenance dept., housekeeping, and receptionists for their dedicated, faithful and loving care not only to our mother but to all the patients at Murrieta Health and Rehab. Double shifts, facing the real fear of getting sick themselves, extra case loads, being blamed for new Corona rules and lots of misunderstandings. Please forgive us and God bless you for your genuine caring to our mother and other families. No one does your jobs for money alone… We need more people like you in this world. Thank you! A celebration of life will be held on Wednesday, April 14th 2021 at 10:00 AM at the Miller-Jones Mortuary – Menifee 26770 Murrieta Rd, Menifee, CA 92586

Our family is sad to announce the passing of our mother Lavina Lisanti on March 19, 2021 in Murrieta, Ca. at the age of 97 years and 7 months! Born in Livingston, Montana on June 23, 1923 to Fred & Nita Zeiner. Predeceased by her parents,... View Obituary & Service Information

The family of Lavina Lisanti created this Life Tributes page to make it easy to share your memories.

Our family is sad to announce the passing of our mother Lavina...

Send flowers to the Lisanti family.